Success of Cellvizio points towards exploitation in new clinical applications. 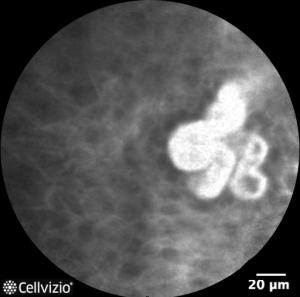 The most recent quarterly results from Mauna Kea Technologies confirmed the rising profile of the Paris-based developer's Cellvizio system, in which a small confocal laser microscope incorporated into an endoscope allows in vivo imaging of pre-cancerous lesions.

Sales of Cellvizio in the year's second quarter rose by 23 percent and brought in nearly $2 million, according to the company's figures.

These numbers also demonstrate that optical biopsy techniques, whereby spectroscopic methods provide in nearly real-time the kind of diagnostic information that traditionally comes from subsequent histology or cytology, continue to have strong appeal for clinicians.

"The basic concepts of optical biopsy have been around for a while and existed before Mauna Kea," commented Anne Osdoit, the company's director of marketing and clinical affairs. "The principle has always made perfect sense as the logical way to take biopsies in the future. But adoption, especially for a new technology, has to be disease-specific and locale-specific."

Economics is also a factor, with the agreement of favorable reimbursement arrangements in the US assisting the current market penetration of Cellvizio in that territory. But Mauna Kea believes it is the potential versatility of the platform that will drive further adoption of optical biopsy techniques.

Some evidence of this came at the Digestive Disease Week conference, held in Florida during May 2013, where 41 presentations highlighted the use of optical biopsy in the gastrointestinal (GI) tract, according to Mauna Kea. The meeting heard examples of the technique being used to examine inflammatory bowel disease, stomach cancer and esophageal cancer.

"The concept is already relatively well-established in studies of the gastrointestinal tract and we have made a lot of progress there," agreed Osdoit. "We are now in the process of developing the technique for application in other areas, and enlarging the number of users to achieve widespread adoption."

Refined functionality
Mauna Kea received FDA and CE Mark approval for the Cellvizio probe in 2005, but development has accelerated since July 2011 when the company went public via an IPO worth $70 million - a placement reported at the time to be five-times oversubscribed.

"At the moment we are seeing the benefits of the original Cellvizio design, which has proven to be very versatile and can be applied to many distinct applications without fundamental changes," said Mauna Kea scientific director François Lacombe. "But of course it takes time and resources to validate each of them. Going public has meant that we can now accelerate those developments and validations." 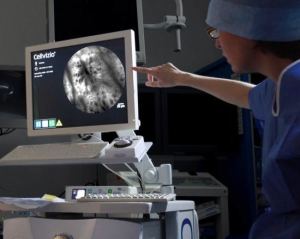 Cellvizio in the OR

The Cellvizio probe achieved a lateral resolution of 3.5 microns and magnification of 1000x in its initial release. Subsequent improvements have now pushed the resolution down to nearer 1 micron, although the exact performance depends on the application.

"After Mauna Kea's IPO, the first task was to optimize Cellvizio for different conditions and provide users with new facilities and functionalities, through re-packaging of the system and new image interpretation tools," said Lacombe.

As a result, a 1-micron resolution is now often the norm for Cellvizio studies of the GI tract, while the incorporation of software able to continuously recalibrate the visual information has improved the visual presentation of data to clinicians. Significant reductions in set-up and calibration times have also helped to make the system as compatible as possible with standard care conditions in hospitals.

Into solid organs
For endoscopy applications, Mauna Kea's strategy has been to expand the use of Cellvizio into applications where optical biopsy can be readily applied without a significant amount of technological development. These have included endourology and endoscopic examination of the bladder; the company received the CE mark for its first probes in urology and bladder examination at the end of 2012, and clinical trials in this area are continuing.

But another major advance has hinged on the development of optical probes able to enter tissues directly to do their work. Mauna Kea has now developed probes small enough to be used in combination with biopsy needles during surgical procedures.

The US Food and Drug Administration recently cleared the company's AQ-Flex 19 miniprobe for use during real-time endoscopic ultrasound-guided fine needle aspiration (EUSFNA), a procedure in which an ultrasound probe and a biopsy needle are employed in tandem. The probe is already available in European markets.

"The AQ-Flex probe enables imaging of solid organs, and EUSFNA, which is mostly used to access the pancreas, is the first application," said Osdoit. "The pathology we are addressing is pancreatic cysts, which are incidental findings from imaging examinations using CT and MRI. Most cysts are benign, but some of them have a pre-cancerous potential. Since pancreatic cancer is a horrible disease, it's important to characterize these cysts and manage them appropriately."

Developing the AQ-Flex probe presented a technical challenge, beyond just the level of miniaturization needed to allow the optical technology to fit into a biopsy needle. The probe also also had to be sterilizable, with a tip robust enough to avoid the risk of leaving any part of itself behind in the organ under examination.

"We envision that this probe could be used in other solid organs and masses in the future," noted Osdoit. "One can imagine many applications in which physical biopsies are difficult or impossible, and where having access to an optical biopsy in real-time would be a big change."