Rapid identification of problems by light scattering could save lives during surgery. 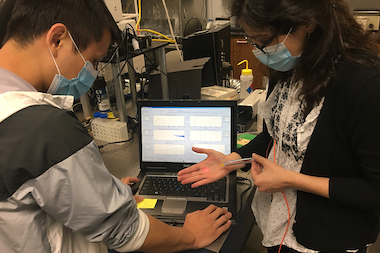 A procedure developed by the University of Central Florida (UCF) could alert clinicians to the onset of blood coagulation, and help avoid potentially life-threatening problems for a patient.

At present, determining if the blood in a patient undergoing heart surgery is thin enough to avoid all risk of clots forming in the heart-lung machine requires the periodic drawing of blood for testing in a separate laboratory.

"There are two problems there," said William DeCampli of project partner Orlando Health. "We are drawing blood from a patient periodically, and if this patient is a newborn baby, it doesn’t take much blood drawn to cause the baby to have a problem with blood loss. Secondly, when we send these tests away, it takes time to get the answer back, as much as 20 or 30 minutes. And that’s too long."

The new study, published in Soft Matter, builds on research by UCF's Aristide Dogariu, who has been working on optical methods to identify blood coagulation as an alternative to traditional testing. In February 2017 a paper from Dogariu's group described how back-scattered light could be used to determine how freely red blood cells were vibrating, with slower vibrations being taken as a sign that coagulation could be occurring.

A subsequent patent from Dogariu and UCF describes an optical coagulation monitor employing low-coherence light delivered through an optical fiber into the blood, detecting dynamic light-scatter signals generated by the blood cells.

This parallels other threads of research into use of scatter and speckle patterns to measure blood flow, such as work at Spain's ICFO into diffuse correlation spectroscopy as a means to monitor cerebral hemodynamics in the treatment of brain injuries and strokes.

The blood is testing itself

Fluctuations in DLS when under 670-nanometer illumination can allow discrimination between different coagulation states, and UCF's optical fiber-based system can be incorporated into standard vascular access devices that allow testing without isolating a blood sample.

"Microrheological description of blood plasma provides a direct link between the composition of whole blood and its coagulability status," noted the project in its published paper. "In our approach of using the red blood cells as probes of their environment, one can say that the blood is practically testing itself."

The project developed a parametric model for the viscoelasticity of plasma, and then validated it both in vitro, using artificial hemo-systems where the composition is controlled, and on whole blood where continuous measurements can provide real-time information.

The results allow the researchers to, for the first time, relate their measurements to what was actually happening to the blood, and explain the changes in the way that red blood cells "jiggle" around in the blood stream.

"We had the measurements that appear to be quite sensitive to real transformations in the bloodstream, but now we can put numbers to those changes," noted Dogariu. "This is what we consider to be the next level in the development of this concept."