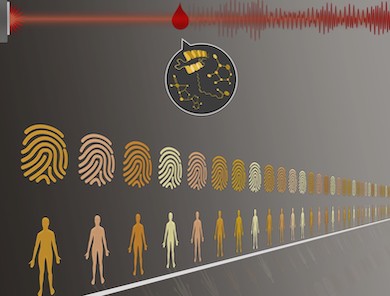 Changes in the molecular composition of blood occur frequently during the onset and course of diseases, potentially offering a route to rapid diagnosis.

The challenge in doing so has to date been that the concentrations of informative molecules can be very low, and the number of different species likely to be relevant may be very high.

A team from LMU Munich and Max Planck Institute of Quantum Optics (MPQ) has now made a significant step towards answering a fundamental question arising from this approach, by investigating the baseline stability of an individual's blood chemistry over days, weeks or months.

As reported in Nature Communications, the project created infrared molecular fingerprints (IMFs) via Fourier-transform infrared (FTIR) spectroscopy from blood samples, and investigated whether the spectral data then changed with the normal passage of time.

If the spectral data remains stable, it could then be a suitable biomarker for individual patients and allow any subtle changes caused by disease to be meaningfully detected.

"First we test whether IR spectral fingerprints can be reproducibly and directly obtained from bulk liquid blood serum and plasma samples, and we determine the range of natural biological variation from individual volunteers," noted the project in its published paper. "Second, we quantitatively relate the variation of the IMFs over time for any given individual to the degree of variability between different individuals."

The team took FTIR spectra spanning mid-IR wavelengths from roughly 3 to 10 microns, a region where the molecular fingerprinting of biomolecules is well known but water absorption is strong. Removing a reference water spectrum allowed the blood's mid-IR fingerprint to be recorded cleanly.

Data was generated using blood from 31 individuals, who were sampled up to 13 times over a period of 7 weeks and again after 6 months. The measurements were performed directly on liquid serum and plasma samples.

Results showed that the IMFs could still be used to correctly identify the individual patient a sample came from with an accuracy of around 80 percent after that time. The team described this as "remarkably stable" given natural variations in most people's normal lifestyle over that period, changes likely to be reflected in the blood.

"This newly revealed temporal stability of blood-based infrared fingerprints provides a basis for future applications of minimally invasive infrared spectroscopy as a reliable method for the future of health monitoring,” says Mihaela Žigman, leader of the research group.

The results also acted as proof-of-concept that IMFs could be robustly and directly measurable in liquid blood samples in a time- and cost-effective manner, as an indication of eventual clinical suitability. Translation into clinics would be an example of a standard Fourier-transform infrared spectroscopy operation typically involving conventional light sources being replaced by a laser-based chemical analysis.

"The key, in this case, is that the analysis ought to be sensitive enough and sufficiently broad to cover a wide range of possible molecules or types of molecules, to be in position to monitor personal health and detect disorders at an early stage," commented Žigman.

"In addition to its uses in the fields of health monitoring and preventive medicine, systems biology should also benefit from the availability of this approach."