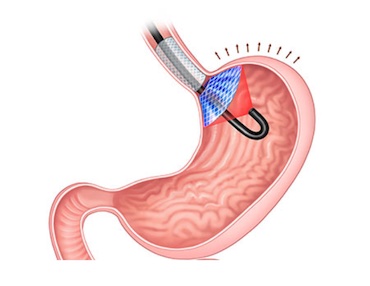 A minimally invasive non-surgical device that delivers laser illumination to the inside of the stomach could be a new tool to combat obesity.

Developed by a team at Seoul's Asan Medical Center (AMC), the intragastric satiety-inducing device (ISD) is designed to both press against the stomach to create a feeling of fullness and employ photodynamic therapy (PDT) from its vantage point adjacent to the stomach wall.

The results, published in ACS Applied Materials & Interfaces, could open a new route to treatment of obesity, a significant global health concern with connections to diabetes, hypertension and cancer.

One factor in the perception of hunger in animals is the hormone ghrelin, a peptide produced in the stomach and known to stimulate the appetite. Reducing the amount of ghrelin produced is one way to curb that appetite and reduce the consumption of food.

An earlier project at AMC investigated a design of ISD in which a stent implanted in the lower esophagus was attached to a flexible disk placed just inside the stomach. The stent successfully slowed weight gain in pig models by physically pushing continuously against the area of the stomach that produces ghrelin, although complications like acid reflux and device migration presented difficulties.

The AMC team has now redesigned its device to incorporate laser illumination and PDT, exploiting the effects of certain wavelengths on the production of ghrelin from irradiated tissues, and allowing the device to be less physically intrusive.

"The ISD is a minimally invasive approach to induce satiety by continuously pressing the stomach and stimulating ghrelin-producing cells," commented the project in its published paper. "To enhance the therapeutic effects of ISD, photodynamic therapy can be incorporated by generating singlet oxygen under laser irradiation."

Potential of PDT in endoscopic therapy

According to the project team the new ISD need only be present in the stomach for a few minutes, and includes a thin fiber-optic laser and a flexible disk coated in methylene blue. When exposed to light from the laser, the methylene blue oxidizes, creating a reactive oxygen species that rapidly kills some of the ghrelin-producing cells in contact with the coated disk.

In trials on anaesthetized young pigs, the methylene blue-coated disk was illuminated with a 644-nm laser for a total of 800 seconds. Unlike the original ISD that remained implanted in the stomach, the new device was removed immediately after the photodynamic therapy.

Pigs that underwent the procedure showed slower weight gain than an untreated pig over the following four weeks. Ghrelin levels in the blood of the treated pigs were found to be lower than in the untreated animal one and two weeks post-treatment, before returning to normal after week three, suggesting that the device's effect is not permanent.

As well as offering a potential new treatment for obesity, the device also indicates the continuing potential for PDT as a therapeutic tool in diverse medical applications. PDT is already a substantial market in consumer and home-based treatments in certain territories, although its use for clinical procedures against conditions such as cancer has been slower to develop.

In 2013 Canadian developer Ondine Biomedical, specialists in antibacterial applications of PDT, described the technology as "awaiting its breakthrough moment," while a 2016 European clinical trial demonstrated the potential for PDT to transform prostate cancer treatment. The new AMC study could indicate a further opportunity for the PDT approach to make a medical impact.

"The simple and unique operation extends the point of view in PDT, and is expected to be a novel endoscopic bariatric therapy," noted the AMC project.