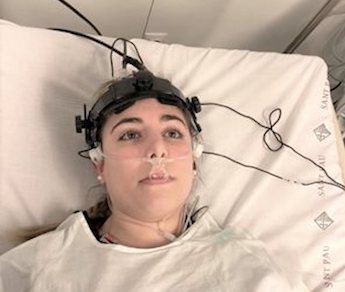 Successful treatment of ischemic strokes, when blood supply to part of the brain has been blocked by a clot, involves restoring the blood flow as rapidly as possible, but imaging this resupply - termed reperfusion - and monitoring its progress effectively can be challenging.

Although magnetic resonance and computed tomography are often used visualize blood flow and triage patients immediately after suffering a stroke, the complexity of these techniques and the equipment involved makes their use after surgery or during recuperation challenging.

A team from Spain's Hospital de la Santa Creu i Sant Pau and the ICFO photonics research center has now developed and evaluated an optical method for assessing cerebral hemodynamics that could be used for beside monitoring of patients, and for detecting the effects of reperfusion therapy in real time. The work was reported in Biomedical Optics Express.

The technique employs two techniques in combination. One is diffuse correlation spectroscopy (DCS), in which microvascular blood flow is detected using the fluctuations or speckle patterns it generates under illumination with near-infrared light. The other is near-infrared diffuse optical spectroscopy (NIRS-DOS), a more established technique which uses the attenuation of light to assess changes in oxy- and deoxy-hemoglobin concentrations.

“Our optical monitoring approach provides a continuous measure of blood flow in the brain's microvessels, which directly provide blood to the brain tissue,” said Raquel Delgado-Mederos of Hospital de la Santa Creu i Sant Pau. “Also, the system we created is portable and suitable for continuous measurement of cerebral blood flow at the bedside of the patient, without the need for technical expertise.”

Commercializing the technology
The team developed a customized DCS/NIRS-DOS system consisting of two optical probes placed on the patient's forehead. These probes contain custom-built fiber optics to deliver light from an infrared laser, which can travel through the skin and skull to reach the outermost layers of brain. The scattered light returning to the surface was detected by the optical fibers and used to gauge blood flow and blood oxygenation.

In its published paper, the project reports a pilot study assessing five patients admitted into the emergency department with an acute ischemic stroke. The new device was used while the patients received treatment with anti-clot medication and used to follow its effect on blood flow and oxygenation. According to the team, the device was deployed at the bedside without any effects on the clinical treatment, and successfully delivered the desired real-time optical data.

"The main difference of DCS over NIRS-DOS is that it provides a direct measure of cerebral perfusion, which is the goal of most interventions, while NIRS-DOS is used as an indirect measure of cerebral perfusion based on changes in blood oxygenation or volume," noted the team. "The combination of both techniques can be used to assess the cerebral metabolic rate of oxygen extraction, a potentially sensitive biomarker of brain injury, and offers a more complete view of brain health than any of the techniques alone."

The next steps for the project will include replicating the study with more patients and under different scenarios, along with development of user-friendly software and probes to facilitate large-scale implementation of the system in fast-paced clinical environments. Spin-off companies, including one from ICFO, are also working to commercialize the technology and to raise funds for clinical trials.

“We hope that providing individualized management of stroke patients with novel optical monitoring systems such as the one we developed will improve the chances of recovery and, consequently, reduce the direct health care and socio-economic burden of this prevalent condition,” said Delgado-Mederos.