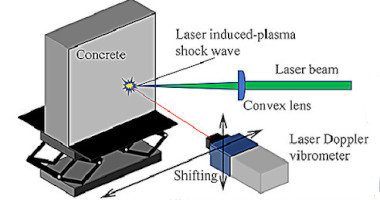 Detecting flaws in concrete materials is vital for civil engineering and structural applications, and a new laser-based method for doing so could help protect critical infrastructure from failure.

Developed at Japan's Shibaura Institute of Technology, it builds on the established principle of generating controlled vibrations or pressure waves in concrete and monitoring their progress through the structure.

As described in International Journal of Mechanical Sciences, the new method uses shock waves generated by laser-induced plasma (LIP), with the LIP itself being created through the action of a Nd:YAG pulsed laser.

Lasers have been applied to similar tasks previously, including the use of laser ablation of solid surfaces as a means of applying the necessary excitation forces; but the ablation of the surface prevents the test from being non-destructive. With LIP the approach can be both non-destructive and non-contact, through the creation of a high-temperature plasma close to the surface of the material.

The response of the material is then monitored through laser Doppler vibrometry (LDV), a technique in which laser light reflected back from a vibrating surface experiences a Doppler shift which can reveal the amplitude and frequency of the vibrations.

In trials, a 1064-nanometer Nd:YAG laser directed 5-nanosecond pulses towards a concrete test block, within which a delamination defect had been deliberately created.

Focusing the pulses to force the laser fluence above a critical value led to the creation of a high-temperature high-density plasma. In the case of the Shibaura experiment this plasma was formed 5.5 millimeters from the surface of the specimen, and the resulting shock wave pressure equated to 472 kilopascals. The vibrations were then analyzed at multiple points on the concrete surface inside and outside the defect area.

As well as initiating a natural frequency response within the concrete structure, the LIP shock wave also induced Rayleigh waves at the site of the defect. Rayleigh waves are a particular form of surface wave characterized by relatively fast velocity, and the researchers were able to successfully determine defect areas by detecting the points where these Rayleigh waves were reflected.

"The advantage of using Rayleigh waves to detect defects is that fewer measurement points are necessary compared to measuring the natural mode," noted Naoki Hosoya. "Additionally, the time required for defect detection can be shortened. Visualizing Rayleigh waves propagation has potential for practical detection of the configurations and defects in concrete."

• Fraunhofer Institute for Industrial Mathematics (ITWM) has announced the development of analysis software designed to reveal even tiny structural changes in reinforced concrete components through a combination of machine learning, structure modeling and imaging, plus statistical methods.

A system under construction at the Technical University of Kaiserslautern, christened Gulliver and said to be unique in the world, will employ the Fraunhofer ITWM analysis to analyze data from CT imaging obtained during concrete deformation. Initial trials will focus on 3D imaging of cracks developing in large concrete beams during a four-point bending test.