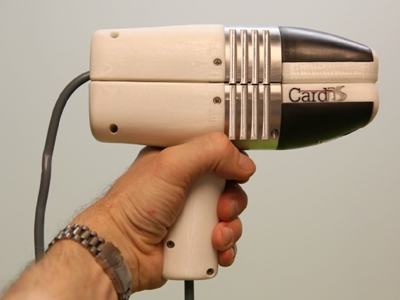 A new photonics-based, non-invasive test to screen for cardiovascular disease (CVD) is showing promise in early clinical trials, according to the European team developing the equipment.

Under the €3.6 million “CARDIS” project, which is part of the Horizon 2020 effort, co-ordinated by silicon photonics specialists at IMEC in Belgium and runs until the end of this month, the team has developed a hairdryer-sized laser Doppler vibrometry (LDV) prototype.

Other key partners include the medical device giant Medtronic, along with researchers at Ghent University in Belgium, the Tyndall National Institute in Ireland, Queen Mary University of London, UK, and the University of Maastricht in the Netherlands.

Easy screening
The technique works by assessing the stiffness of major arteries from a measurement of aortic pulse wave velocity – the speed at which a person’s blood pressure pulse circulates around the vascular system. That stiffness, caused by the build-up of plaque inside an artery, is seen as a major risk factor but is difficult to measure.

If it works as planned, low-cost and highly portable LDV equipment could provide an easy and non-invasive way to screen large numbers of patients for undiagnosed CVD – something that no other tool can currently provide.

So far, the team led by IMEC’s Roel Baets has carried out a clinical feasibility study on 100 patients, some healthy and some with cardiovascular conditions, at the Georges Pompidou European Hospital in Paris, France.

“The quality of the device readings was found to be very good, and adequate measurement results could be obtained in all subjects,” reports IMEC, adding that the data collected and variability within sessions were in line with that acquired by reference techniques.

Following further analysis by project partners, another clinical study is planned at the Academic Hospital of Maastricht.

Pierre Boutouyrie, the cardiologist in charge of the initial feasibility study, said in an IMEC statement: “The CARDIS device was well accepted by all patients, and it was considered useful and well tolerated.

“Feasibility of signal acquisition is excellent since a useful signal was acquired in 100% of the patients. Tolerance was excellent too, the time to get useful signals was less than ten minutes, and patients barely noticed that a measurement was performed.”

Silicon photonics
To make the LDV measurement, a very low-power laser is directed towards the skin above an artery. A patient’s heartbeat pattern is then extracted from the Doppler shift of the beam reflected by the skin. The CARDIS device features two rows of six beams, and is able to scan multiple points in parallel. 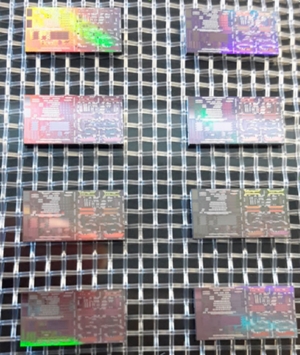 As well as indicating arterial stiffening, those measurements can be used to check for aortic stenosis, a relatively common heart valve problem in elderly patients. At the heart of the multi-beam LDV system is a silicon photonics chip designed by the Photonics Research Group team at Ghent University, and then prototyped using IMEC’s in-house silicon photonics pilot facility.

It is said to feature advanced optical packaging approaches provided by the partners at Tyndall, with Medtronic then integrating the components into a highly portable handheld device.

Baets, who heads up the Photonics Research Group in Ghent, said: “Silicon photonics is a powerful technology that combines the unique sensing capabilities of photonics with the low-cost and miniaturization capabilities of silicon semiconductor technology.

“It’s exciting to know that our silicon photonic chip and prototype medical device hold the promise to change the lives of so many patients with cardiovascular diseases.”

The next stage of the project will see a small series production run to make a few of the LDV systems for a clinical feasibility study on a larger group of patients, and over a longer period of time.

IMEC says that if this larger study proves that the LDV technology is able to detect cardiovascular diseases at an early stage, high-volume production may be initiated.