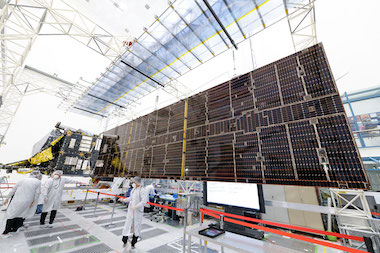 The Psyche spacecraft, NASA's mission to the asteroid named 16 Psyche, has undergone a successful assembly test of its solar arrays.

During the trial, the twin solar arrays that will eventually supply electricity to Psyche were attached to the probe, unfolded lengthwise, and then restored. This marks the full assembly of the Psyche vehicle, which is due to launch in August 2022.

Each array consists of five panels in a cross formation and measures 11.3 meters in length, large enough that only one array could be deployed at a time in the available space at NASA's JPL facility. When both are unfurled Psyche will boast 75 square meters of solar array, the largest ever installed at JPL.

Changes to the standard Maxar solar array were also essential, to deal with the cold temperatures and dim sunlight that Psyche will experience at its destination in the asteroid belt. The arrays were reconfigured to produce a lower voltage in the vicinity of Earth, rising to their maximum capacity as the arrays get colder on their journey.

The intention is for the system to be operating at its highest efficiency when the spacecraft approaches its destination in 2026, and spends the following two years making increasingly close orbits of the asteroid to study an unusually metal-rich composition.

Laser link to the outer planets

DSOC was conceived decades ago, based on the principle of transmitting a 1064 nanometer laser from an Earth-based ground station to a spacecraft, which can use it as a stabilization aid while beaming a separate high-bandwidth 1550 nanometer downlink laser back to Earth.

When Psyche was selected as the carrier for a DSOC demonstrator in 2017, NASA said that the laser beacon will be transmitted from JPL's Table Mountain Facility in California, while the DSOC data will be beamed back to the Palomar Mountain Observatory.

Writing in 2021, JPL's Psyche team explained that the on-board component of DSOC, isolated thermally and mechanically from the rest of the craft, will only be employed when Psyche's thrusters are off and its solar arrays are stationary, to allow the laser to be directed back to Earth with microradian accuracy.

The team also noted that DSOC will be used and tested only during the first year of the mission, while traveling to just past the orbit of Mars. When it arrives at Psyche, the craft will transmit data back to Earth over a microwave radio link.

NASA envisages further evolutions of DSOC platforms playing a key role in communicating with spacecraft venturing further afield, scaling up the on-board laser to potentially achieve data links of 10 Mb/s from Saturn and 250 kb/s from Neptune. The challenge for distances beyond Saturn will ultimately be to acquire and track the communication link from the spacecraft without a laser beacon from Earth.