...and Xanadu collaborating with GlobalFoundries to develop high-volume manufacturing of photonic chips for quantum computers. 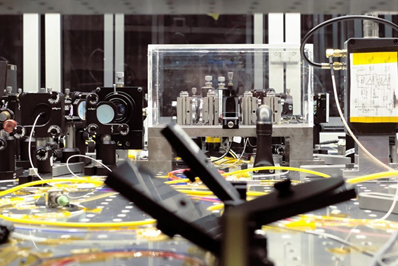 Optical system: the foundation for the photonic quantum computer.

Over the next four years, the newly-assembled PhotoQ consortium is aiming to create a photonic quantum computer. The group says it will develop a new platform based on “a different technology from the best current quantum processors – and will have the potential to beat them.”

Consortium partner NKT Photonics this week outlined the reasons behind the project on its website: “Today, even the largest supercomputers have problems handling the calculations and large amounts of data it takes to solve complex problems, such as advanced logistics and the development of medicine.

The PhotoQ project is intended to take the technology in a new direction and pave the way for scalable photonic quantum processors. The project will map how the photonic quantum computer can make a difference in the logistics and pharmaceutical industries. NKT states, “PhotoQ ensures an innovation leap towards the development of a quantum computer that can crush computational problems that classic computers have to spend years on – the so-called quantum advantage.”

PhotoQ is also expected to secure Denmark a share of a rapidly growing global market, estimated to reach an annual turnover of €80 billion in 2040. In Denmark alone, it may lead to over 2000 new jobs, say the partners.

Professor Ulrik Lund Andersen, of DTU Fysik, commented, “In recent years, we have purposefully pursued an ambition to develop a photonic quantum processor and demonstrate the potential of the platform. We have come a long way, and PhotoQ lets us go from research to innovation and set the course for a universal error-corrected quantum computer.”

PhotoQ is aiming to build a photonic quantum computer based on pioneering research from DTU. The platform has several significant strengths compared to the platforms that have driven the development so far. A photonic processor is significantly easier to scale than, for example, superconducting quantum processors as the latter require expensive and energy-intensive cryotechnology to keep their quantum bits stable.

NKT says that the ambitions of PhotoQ go beyond the quantum technological core innovation. In parallel with the hardware development, the consortium will develop algorithms that will solve known issues within pharma and logistics, such as molecular modeling and route optimization. The project will map and evaluate the applications and identify the problems where photonic quantum computers can offer the greatest possible technological improvements.

Lasse Jiborn, Commercial Director of Intelligent Optimisation at AMCS Group, said, “When we deliver route optimization to the logistics industry, we solve an extended traveling salesman problem – a 10-stop trip has over 3 million possible routes. It requires enormous computing power to identify the optimal route. PhotoQ is an ideal opportunity for us to investigate the benefits a quantum computer can bring to our company.”

The consortium behind PhotoQ covers the entire value chain: expertise in logistics optimization from AMCS Group; quantum chemistry from Molecular Quantum Solutions; quantum algorithmic expertise from Aarhus University and Kvantify; laser technology from NKT Photonics, and development of photonic quantum computer hardware from the Technical University of Denmark. The Innovation Fund Denmark has already invested close to €3 million in the project. 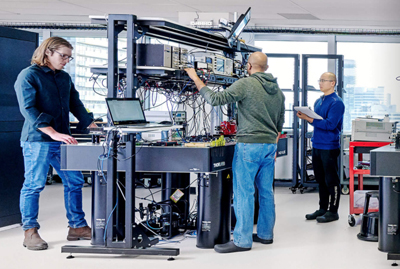 Quantum computing firm Xanadu has announced a collaboration with semiconductor contract manufacturing and design company GlobalFoundries “to take the first steps toward high-volume manufacturing of photonic chips for universal and fault-tolerant quantum computers.”

Taking advantage of the sophistication and feature set offered by GF Fotonix, Xanadu says it is now designing integrated photonic devices, used for implementing quantum error correction, for 300mm wafer fabrication. The partners say that the first fully functional devices will be ready by the end of 2023.

“Many chips, operating in parallel and networked together, are required to process the large number of qubits involved in fault-tolerant quantum computing algorithms,” said Zachary Vernon, Head of Hardware at Xanadu. “Leveraging an existing advanced 300mm platform like GF Fotonix gives us a huge advantage in the race to deliver a useful, error-corrected quantum computer.”