Mission will be first to use optical link to send scientific data and high-res imagery back to Earth from deep space. 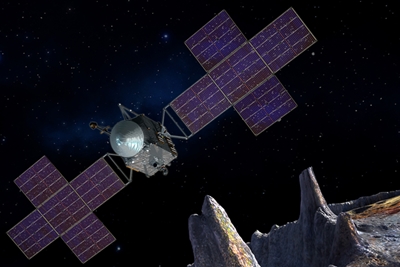 US-based LGS Innovations, formerly a part of Bell Laboratories and communications giant Alcatel-Lucent, has won a contract from NASA to provide a laser transmitter for a first-of-a-kind space mission.

The Herndon, Virginia, company’s photonics technology will be one of the key elements in a high-bandwidth optical communications link that will beam data and high-resolution imagery back to Earth from a craft orbiting around an unusual metal asteroid.

A part of what is known is full as NASA’s Deep Space Optical Communications (DSOC) project, the laser transmitter will fly on the mission to the asteroid “Psyche” as a technology demonstration.

In parallel with a more conventional X-band microwave link, it will send engineering and science data from the Psyche Spacecraft and is said to be the first such laser transmitter to support deep-space, high-bandwidth optical communication.

Planetary core
The Psyche mission, led by Arizona State University (ASU), is set to investigate a rare nickel-iron asteroid that is thought to be an exposed planetary core. Launch is currently earmarked for 2022, with the craft due to arrive at Psyche in 2026 for a 21-month observation period in orbit.

LGS’ CEO Kevin Kelly said: “This is a unique project of many firsts. We are honored to support the NASA DSOC’s goal to increase communications performance and data transmission rates by many times over conventional means, in a very small form factor.

“The unprecedented high-bandwidth communications links will enable a wider range of future scientific inquiry than is currently possible, as well as improved human communications back to Earth.”

Its unusual metallic make-up means that the asteroid is of particular scientific interest, and the craft will carry a magnetometer and a gamma-ray spectrometer alongside a high-definition multispectral imager to better understand the phenomenon.

On its own mission web page the ASU research team speculates that Psyche may be the metal from the core of a proto-planet that was somehow stripped of its outer mantle – perhaps by violent impacts in the dim and distant past of the Solar System's formation.

The DSOC architecture is based around a 1064 nm laser beacon sent from Earth to assist line-of-sight stabilization. That will enable the payload to align its LGS-built 1550 nm high-bandwidth laser transmitter back in the precise direction of the ground receiver on Earth.

That laser beacon will be transmitted from JPL’s Table Mountain Facility in California, while DSOC’s data will be received at a large-aperture ground telescope at the Palomar Mountain Observatory.