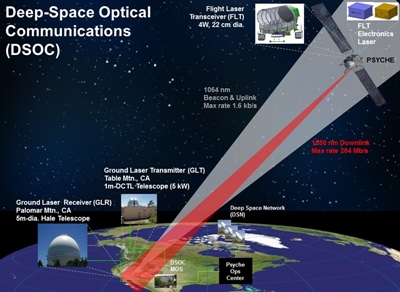 A forthcoming NASA mission to probe an unusual metallic asteroid will also be used to carry out tests on laser communications between Earth and deep space, says the agency.

The mission to “Psyche”, scheduled to launch in summer 2022 and reach the asteroid belt some four years later, will test the ability of deep-space optical communications (DSOC) hardware to transmit data at a much higher bandwidth than is possible with conventional radio-frequency (RF) technology.

Similar laser communication systems are already starting to be deployed in space - for example the European Data Relay System - although these are in orbit around Earth. Psyche would mark the first time that such an approach has been tested in a deep-space environment.

Proto-planet
According to NASA's Jet Propulsion Laboratory (JPL), the Psyche mission is a “journey to a unique metal asteroid” that appears to comprise the exposed nickel-iron core of a proto-planet. Said to be one of the first asteroids to be discovered, Psyche is named after the Greek goddess of the soul and measures nearly 300 kilometers across.

The metallic structure makes it of particular interest to planetary scientists, and the Psyche activity is led by an Arizona State University (ASU) team. Lindy Elkins-Tanton, director of ASU’s School of Earth and Space Exploration in Tempe, is the principal investigator. The mission payload will include a high-definition multispectral imager, magnetometer, and a gamma-ray spectrometer.

Not much is known about how the unusual asteroid formed, and the ASU mission web page asks: “What is Psyche’s story? One scenario is that long ago, a proto-planet that had separated internally into a rocky mantle and iron core suffered violent impacts that stripped away its mantle, leaving only the metal core.

“Or is Psyche a survivor of some more unusual process not yet imagined? What can it tell us about how planets everywhere form and about what's inside the Earth, Mars, Venus, and Mercury?”

Laser beacon
The DSOC architecture is based on transmitting a 1064 nm laser beacon from Earth to assist line-of-sight stabilization, enabling the payload to point a high-bandwidth downlink laser beam (operating at 1550 nm) back in the precise direction of the separate ground receiver (see figure above).

The laser beacon will be transmitted from JPL’s Table Mountain Facility in California, while DSOC’s data will be received at a large-aperture ground telescope at the Palomar Mountain Observatory.

According to JPL’s Abhijit Biswas, a DSOC Project Technologist in Flight Communications Systems who has been working on the technology for close to two decades, the on-board laser is based on a fiber-optic master-oscillator power amplifier (MOPA) design.

Biswas expects the hardware to begin operating approximately 60 days after launch, with test runs taking place on the probe’s outward journey. But the initial mission could represent just the first step towards deployment of a laser-based communications system to support a future mission to Mars.

“Laser communications is going to augment that capability tremendously,” Biswas said. “The ability to send back from Mars to Earth lots of information, including the streaming of high-definition imagery, is going to be very enabling.”