As US Congress prepares to decide on the future of the space telescope, all of its mirrors now have ultra-thin gold coatings. 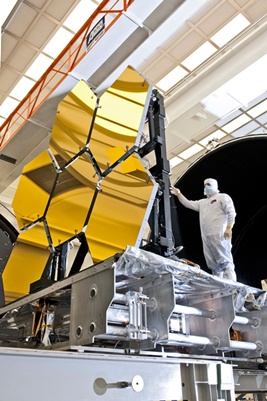 All mirrors set to fly on board the James Webb Space Telescope (JWST) have now passed a key manufacturing stage, with the segments coated in ultra-thin layers of gold.

Eight years after the mirror manufacturing process began – with beryllium blanks designed to maintain their shape in the extremely low temperatures of space – the New Jersey-based company Quantum Coating deposited a 120 nm-thick layer of gold on the final segments of the hexagonal primary mirror.

Gold is highly reflective of infrared light, which will allow the space telescope to collect light from some of the most distant objects at the edge of the universe, meaning that scientists will be able to see the earliest images of galaxy and star formation.

Following the latest coating stage, the mirror segments were shipped to Ball Aerospace in Colorado, where actuators used to adjust the position of the segments will be attached. After that comes a final test stage at NASA’s Marshall Space Flight Center in Alabama, where the giant optical components will be chilled to cryogenic temperatures. The final batch of mirrors are expected to complete that test stage by the end of this year – nearly three years after the first such tests were completed.

JWST under threat
By then, NASA should know whether or not the JWST will be scrapped as part of package of spending cuts proposed by a Republican-controlled House Appropriations subcommittee in July, and set to be debated in the Senate imminently. NASA’s funding for fiscal year 2012 in the proposal is $1.6 billion lower than fiscal 2011, and the committee singled out the JWST as a target because of its cost and schedule overruns, citing poor management.

In response to that proposal, Northrop Grumman – lead contractor on the design and development of JWST – has set up a web page encouraging support for continued development of the telescope and lobbying of government officials.

Meanwhile SPIE, the owner of optics.org, last month wrote to the House urging that JWST be fully funded to its completion – pointing out that the project already has more than three-quarters of its hardware delivered.

The SPIE letter adds that NASA's fiscal 2012 budget proposal asked Congress for $375 million to fund JWST for the coming year -- hundreds of millions less than had been estimated by the Independent Comprehensive Review Panel to keep the launch from extending beyond 2015.

In addition to that support, a Washington Post editorial in August pointed out that billions of dollars would be wasted by canceling the project, and that Hubble, JWST’s predecessor, was also, the words of the House committee, “plagued by poor management”. And yet Hubble, once fixed, yielded arguably the most iconic and inspirational astronomical images ever produced.

A 'town hall' webinar update on the latest progress made with the JWST including reaction to the threat to funding posed by the House committee is scheduled to take place next week, hosted by the Space Telescope Science Institute (STSI). For further details, visit the STSI web site.