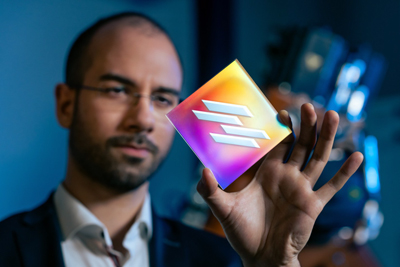 Lotus effects and other structures can be transferred onto technical surfaces.

Modern light interference technologies developed in Dresden, Germany, are enabling “lotus effects” and other refined structural features from the natural world to be transferred quickly to technical surfaces such as battery components, implants and even airplanes.

The lotus effect uses a microstructure to allow any dirt that might stick to an exterior surface to simply wash away the next time it rains. The fine ripples of shark skin, meanwhile, improve the dynamics of air and water on the outside of airplanes and ships, thus saving fuel.

This process incorporates the nano- or microstructure directly into a surface using a laser in order to create biomimetic effects. It is a remarkably quick process, say the developers, and can treat up to one square meter of surface per minute.

The new technology is so promising that it led to Fusion Bionic being founded in 2021 as a spin-off from Fraunhofer IWS. Fusion Bionic develops and markets DLIP system solutions for biomimetic surface finishing, but also provides surface functionalization services to its customers.

“For a long time, lasers were much too slow to be used for finishing surfaces with large areas compared to coating or applying films,” said Dr. Tim Kunze, Managing Director of Fusion Bionic. Kunze founded the company together with three partners. “But with the DLIP process we’ve made the leap to processing large surface areas quickly.” 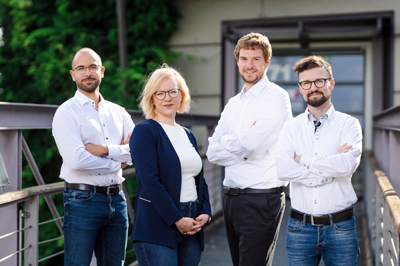 Conventionally, people think of a laser as a single fine beam. Using it like a needle to make a pattern in a surface would be extremely time-consuming. The way the DLIP process works is different. First of all, it splits a single laser beam into multiple clusters of beams. To apply a pattern to the surface, these multiple laser beams are superimposed in a controlled way to create what is known as an interference pattern, which can be distributed over a wider area.

Where light hits the surface, the laser energy removes or alters part of the material, while dark areas remain unaffected. “This allows us to create virtually any structure imaginable,” said Kunze. “Lotus effects, shark skin, moth eyes and many more.”

During his time at Fraunhofer IWS, his team worked closely with Prof. Andrés Lasagni of Technische Universität Dresden and with Airbus to develop a microstructure that prevents ice from building up on airplane wings during flight.

Traditionally, this is achieved by piping hot exhaust air from the aircraft engines to the wings. However, this wastes energy from the engines. The project found that the energy required by an ice protection system decreased by 80 percent when the wings also incorporate a DLIP microstructure.

“This is an especially good solution for the electrically powered planes of the future, because those engines won’t generate any waste heat,” says Tim Kunze. Other projects have worked on processing implants such as prosthetic hip joints and dental implants to make their surfaces especially biocompatible or antibacterial.