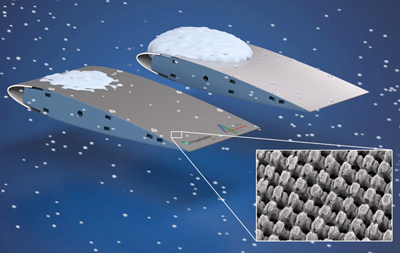 Ice on an aircraft’s surfaces can be a hazard: it increases drag and fuel consumption, disrupts aerodynamic flows, and decreases lift, impairing an aircraft’s ability to fly safely. Researchers at the Fraunhofer Institute for Material & Beam Technology (IWS), Airbus, and the Technical University of Dresden, Germany, have developed a laser process that fills two needs with one deed.

The work is described in a recent paper in Advanced Functional Materials, under the title Design Rules for Laser-Treated Icephobic Metallic Surfaces for Aeronautic Applications.

Ice formation presents a safety risk for aircraft. A thin layer of frost settling on the wings or other neuralgic points such as the tail can adversely affect the aircraft’s aerodynamics. Lift may decrease and drag increase. Ice accumulating on probes and sensors can compromise air speed measurements that are critical to in-flight safety.

This is why snow and ice have to be cleared from aircraft before they take off. On the ground, this task falls to special vehicles that spray chemical agents onto all vulnerable surfaces. These antifreezes also go to prevent ice from forming. However, fluids of this type are harmful to the environment and expensive.

Moreover, a substantial amount – 400 to 600 liters – is typically needed to de-ice a plane. Airborne aircraft also have to be protected against this frosty peril. In most cases, ice protection systems such as heating elements are installed on board to do the job. But an obvious drawback of these weighty and energy-consuming heaters is that they increase fuel consumption. 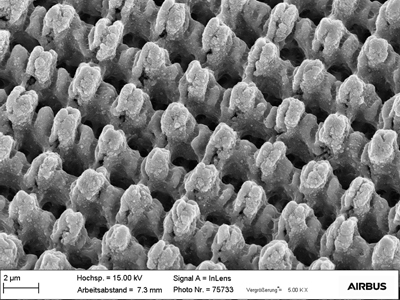 Using a technology known as Direct Laser Interference Patterning (DLIP), a research team at Fraunhofer IWS collaborated with project partners at Airbus and TU Dresden to develop a new process that creates complex, meandering surface structures at the micron- and submicron scale, with the effect of decreasing ice accumulation and accelerating de-icing.

The interference principle is at the base of Direct Laser Interference Patterning (DLIP) and the Fraunhofer IWS scientists create these patterns in different ways to produce nano- and micrometer-sized structures and surface topographies tailored to various applications.

DLIP involves splitting a coherent laser beam into two or more beams and superimposing them on the surface of a com-ponent in a controlled fashion. The interference effect caused by this superposition of laser beams is a “periodic modulation of laser intensity” that can serve to treat 2D and 3D components’ surfaces with well-defined patterns.

What sets this process apart is that the researchers combined DLIP with ultra-short pulse lasers to create multilevel, 3D microstructures on wing profiles in a single step. As a result, some of the ice simply loses its grip, depending on the conditions under which it froze, and spontaneously detaches after reaching a certain thickness.

Also, such a de-icing process requires 20 percent less heating energy. Other advantages of the new process are that it can reduce the required amount of environmentally harmful de-icing agents and the time passengers have to spend waiting for a plane to be de-iced. The same goes for in-flight power and fuel consumption. It can even reduce the aircraft’s total weight if smaller heating units are installed. This combination of these two effects has yet to be achieved with conventional technologies. 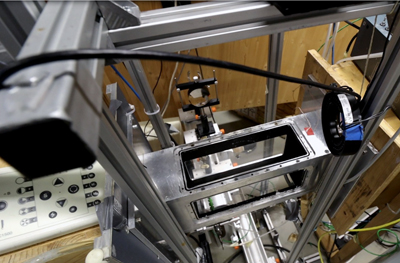 Tests in the wind tunnel at AIRBUS.

The DLIP process was developed in a join effort between Fraunhofer IWS and TU Dresden in order to find the optimized DLIP surface structure. The IWS scientists developed the patterning process to transfer the optimized structure onto a final demonstrator: this is a complex three-dimensional NACA (NASA's National Advisory Committee for Aeronautics) airfoil which served as a miniaturized but realistic wing pendant.

Airbus was able to demonstrate that ice growth on the functionalized surface is self-limiting. In fact, the ice falls off after a certain amount of time without requiring added surface heating. Additional experiments also showed that it took 70s for the ice on an unstructured airfoil to melt at 60 watts of applied heat. The ice on the structured airfoil receded completely after just five seconds at the same amount of applied heat. The DLIP technology accelerated the process by more than 90 percent. It required 75 W, or 25 percent more heating power compared to the DLIP surface, to remove the ice on the unstructured demonstrator.

“We demonstrated for the first time and in a realistic way the great anti-icing potential that can be tapped with large-scale laser surface patterning. With our DLIP approach, we realized biomimetic surface structures on a complex component like the NACA airfoil, and demonstrated its distinct advantages over other laser processes," said Dr. Tim Kunze, Team Leader Surface Functionalization at Fraunhofer IWS. 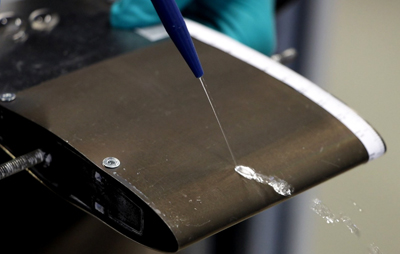 The research team has established a key technology by using short and ultrashort pulse lasers for Direct Laser Interference Patterning. It can serve many applications, for example, to structure functional surfaces on wind turbines or other components that can ice over in cold regions.

This technology can be also applied to very different fields such as product protection, biocompatible implants and improved contacts for electrical connectors. “We can apply functional microstructures over large areas and at high process speeds, thereby achieving benefits for a number of applications that, until now, had been inconceivable,” said Kunze.

The partners say their next step will be to optimize the new method and adapt it to various air zones. They will take into account the results obtained in real-world flight tests currently underway with an A350 aircraft whose surfaces have been treated with DLIP.