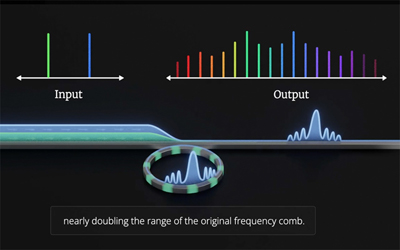 NIST has almost doubled the range output by a frequency comb.

Researchers at the US National Institute of Standards and Technology (NIST) have expanded by nearly two-thirds the frequency range over which a chip-scale device can generate and measure the oscillations of light waves with “exquisite accuracy”. They say that the expanded range of the system, known as a microring resonator frequency comb, or microcomb, could lead to better sensors of greenhouse gases and may also improve global navigation systems.

Gregory Moille and his colleagues at NIST, including team leader Kartik Srinivasan, along with collaborators at the Joint Quantum Institute (a NIST-University of Maryland research partnership) and the University of Maryland, have recently reported their findings in Nature Communications.

Over the past two decades, scientists at NIST and other research institutions have shown that microcombs can play an important role in building highly accurate optical clocks, calibrating detectors that analyze starlight to search for planets beyond the solar system, and detecting trace gases in the environment.

One type of microcomb extensively studied at NIST consists of a miniature, rectangular waveguide coupled to a ring-shaped resonator about 50 micrometers in diameter. Laser light injected into the waveguide enters the microring resonator and races around the ring. Ordinarily, the circulating light begins to vary in amplitude and can form different patterns. However, by carefully adjusting the laser, the light within the microring forms a soliton--a solitary wave pulse that preserves its shape as it moves around the ring.

The train of wave pulses in the waveguide corresponds to a single set of evenly spaced frequencies and forms the teeth of the frequency comb. The number and amplitude of the teeth are primarily determined by the size and composition of the ring and the power and frequency of the laser.

Recently, the NIST scientists wondered what would happen if they produced a microcomb using two lasers, each generating a different frequency of light, instead of just one. They found that through a complex series of interactions with the soliton light circulating in the microring resonator, the second laser induced two new sets of teeth, or evenly spaced frequencies, that are replicas of the original set of teeth but shifted to higher and lower frequencies.

The lower frequency set lies in the infrared part of the spectrum, while the other is at much high frequencies, close to visible light. The comb also retains its original teeth, at near-infrared frequencies. The extended range of the microcomb enables a host of applications at different frequencies. The system is the first time that researchers have produced a stable microcomb that ties together such a wide range of frequencies of light, Srinivasan said.

In addition, the team discovered that by varying the frequency of the second laser, the new sets of teeth could be easily shifted to higher or lower frequencies independent of the shape or composition of the microring resonator. The achievement may enable a single microcomb to measure the characteristic vibrations of atoms and molecules, including pollutants, that both emit and absorb light over a broad range of frequencies, thus enhancing the sensitivity of detectors.

The broader coverage could also help subsequent efforts to stabilize the microcomb, so that its tick marks remain fixed rather than wander slightly from their original set of colors. The enhanced stability may spur the development of portable optical atomic clocks accurate enough to be employed outside the laboratory, leading to more accurate and precise navigation systems, said Moille.