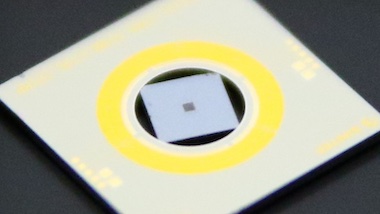 Lenses with tunable focusing capabilities are attractive for a range of operations, including several bioimaging operations where speed of image capture is critical.

Metasurfaces can offer a route to achieving this, thanks to their potential for creating non-classical optical behavior at their nanostructured surfaces. Recent examples have included a project at MIT to design a metalens that could offer two distinct focus powers without any physical manipulation of the lens itself, because of the different nanostructures created on its surface.

A project at Norway's Sintef research center has now developed a device in which a piezoelectric thin film is used to change the focal length of a metalens when a voltage is applied. As reported in Optics Letters, this approach will suit portable medical diagnostic instruments, drone-based 3D mapping, and other applications where miniaturization is a factor.

"This type of low-power, ultra-compact varifocal lens could be used in a wide range of sensor and imaging technologies where system size, weight and cost are important," said project leader Christopher Dirdal from Sintef Smart Sensors and Microsystems. "In addition, introducing precision tunability to metasurfaces opens up completely new ways to manipulate light."

Previous approaches to tuning a metasurface by altering its shape or geometry have included the use of flexible substrates or the action of electrostatic actuators, and Sintef previously demonstrated that using piezoelectric MEMS actuation could produce very small controlled displacements in a metasurface, changing the surface plasmon resonances that influence light behavior.

It has now used the same approach to demonstrate larger displacements using piezoelectric lead zirconate titanate (PZT) membranes, indicating how the components might be put to use in real-world applications.

Twice the displacement at a quarter of the voltage

For its proof-of-concept device, Sintef employed a metasurface of silicon rectangular pillars, 240 × 330 nanometers in cross section and 1050 nanometers high with a periodicity of 835 nanometers.

The project placed a 300 x 300 micron metalens on a square silicon chip, itself suspended in a thin-film PZT MEMS-actuated ring. Voltage application over the PZT membrane causes it to mechanically deform, moving the center silicon chip. The actuator ring was segmented into two concentric groups of three electrodes, according to the project's published paper, allowing a range of positional forces to be applied to the metasurface in an analogous way to existing tip-tilt MEMS mirror assemblies.

In trials the new device proved capable of out-of-plane displacement of the metasurface in the range of 7.2 microns under a voltage application of 23 volts. The focal length change produced was around 250 microns, according to the project.

"Our novel approach offers a large displacement between the metasurface lenses at high speed and using low voltages," said Dirdal. "Compared to state-of-the-art devices, we demonstrated twice the out-of-plane displacement at a quarter of the voltage."

Future work will involve using metalenses with stronger focusing power, and optimizing the MEMS design for longer stroke actuation, since tunability on a larger scale would make the device useful for imaging at various depths into tissue to image neurons or blood vessels.