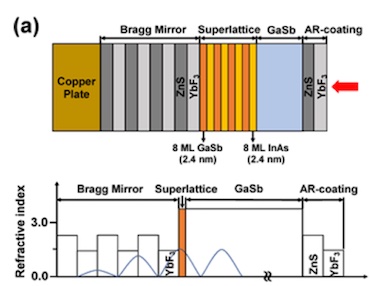 A new development in semiconductor saturable absorber mirrors, or SESAMs, could help the components be used in applications for which they have previously not been suitable.

SESAMs typically combine a mirror structure with an incorporated saturable absorber, a light absorbing structure where the absorption is non-linear and reduced at high optical intensities.

This principle is used in the creation of ultrashort laser pulses, thanks to the way that SESAMs can contribute to passive mode-locking of a source. In the correct architecture, a saturable absorber can suppress pulses that are weaker than desired while attenuating the pulse in a way that shortens its duration.

Current SESAMs have recently found use in systems such as the sensitive gas sensor platform developed by NIST, as part of an architecture including a frequency comb and a fiber laser source.

The new breakthrough by Shanghai Jiao Tong University relates to the wavelengths at which SESAMs can operate, wavelengths previously limited to less than 3 microns. This has closed off a number of potentially valuable applications.

"SESAMs have revolutionized the ultrafast mode-locked laser field by producing numerous landmark breakthroughs in laser levels," commented the project in its Optics Letters paper. "However a critical challenge remains: extending SESAM technology to the mid-infrared (MIR) region. The development of mode-locked lasers in this region has been impeded by the lack of a robust saturable absorber."

MIR ultrafast mode-locked lasers in the 3 to 5 micron region are considered vital for applications ranging from spectroscopy to medical diagnosis, since the spectral region covers the vibration and rotation characteristic lines of many important gas and organic molecules.

The existing wavelength limitation stems from the semiconductor materials currently employed, typically based on indium gallium arsenide (InGaAs), in which the inherent quantum well structure effectively limits the wavelength range of operation.

Solving the problem involved engineering a SESAM containing a superlattice of InAs and gallium antimonide (GaSb), an absorption layer grown by molecular beam expitaxy on a GaSb substrate. Bandgap engineering and the strong coupling between potential wells changes the saturable absorption wavelengths of the structure, shifting it to the 3 to 5 micron region.

In trials using the fabricated SESAM, the project experimentally demonstrated long-term stable mode-locking operation of an Er:ZBLAN fiber laser at 3.5 microns. This verifies the robustness and reliability of the SESAM and "delivers MIR ultrashort pulses with high long- term stability."

The project noted that the potentially wide response range of its fabricated mid-IR SESAMs is different from that of traditional SESAMs, which have a narrow-band characteristic arising from their quantum wells. Adjusting the design parameters should allow the new InAs/GaSb-based SESAM to be useful across a number of laser types, according to the project.

"The fabricated SESAM exhibits a great potential to be widely used for fluoride fiber lasers, crystal lasers, and even semiconductor lasers in the 3 to 5 micron spectral range," noted the project. "It will promote the development of mid-IR ultrafast coherent sources and related application fields."