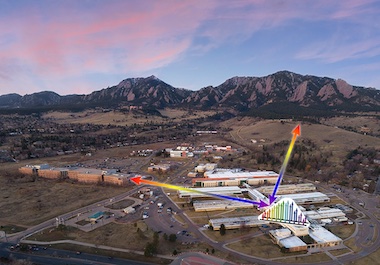 Laser combs, in which the output is divided into a series of discrete frequency lines, are already valuable sources for gas sensing applications and the detection of different species.

A project at NIST has now demonstrated how the approach can be extended to allow a single frequency comb instrument to sense several primary greenhouse gases.

This could help in understanding and monitoring emissions of the heat-trapping gases implicated in climate change, as well as the monitoring of air quality and pollution.

NIST's previous studies of applied frequency comb technology have included their use in a portable system to monitor methane and ammonia from agriculture; and chip-based microcombs for telescopes and atomic clocks.

As described in Laser & Photonics Reviews, the new advance shifts the spectral region of the frequency comb from the near-infrared into the mid-infrared, bringing several chemical species of interest into the detection range.

The prospect of straightforward imaging in the mid-IR has been of significant interest in medical and diagnostic applications for some time, with development of affordable sources and sensitive detectors being highlighted as a route to improved cancer diagnosis.

For atmospheric studies, the new NIST device was specifically designed to allow detection in the mid-IR window around 5 microns, where greenhouse gases nitrous oxide and carbon dioxide are active species, along with water, ozone and carbon monoxide.

NIST's platform is based on open-path Fourier transform infrared (OP-FTIR) spectroscopy, in which gas analysis occurs along an open linear pathway using light bounced off a reflector back to the instrument for analysis.

OP-FTIR was combined with dual-comb spectroscopy, an approach in which two laser frequency combs with slightly different repetition rates are employed as an alternative to a broadband source, reducing the size and complexity of the instrument.

"The system in this experiment split the near-infrared light from one original comb into two branches, used special fiber and amplifiers to broaden and shift the spectrum of each branch differently and to boost power, then recombined the branches in a lithium niobate crystal to produce mid-IR light," commented the project.

Atmospheric data must be correct

In trials, the project used its mid-IR frequency comb to probe both a 2 kilometer and 600 meter open-path round trip adjacent to the NIST campus in Boulder, Colorado.

Measurements over a five-day period at 2 minute temporal resolution were precise enough to resolve the atmospheric concentration variations of the multiple gas species of interest, according to the project. The results were in agreement with those from a conventional point sensor for carbon monoxide and nitrous oxide.

Significantly, NIST noted that its measurements of the ratio of excess carbon monoxide to carbon dioxide agreed with similar urban studies, but was only about one-third of the levels predicted by the US National Emissions Inventory (NEI).

The NIST measurements echoed other studies suggesting there is less carbon monoxide in the air than the NEI predicts, and put the first hard numbers on the reference levels, or inventories, of pollutants in the Boulder-Denver area, said the team.