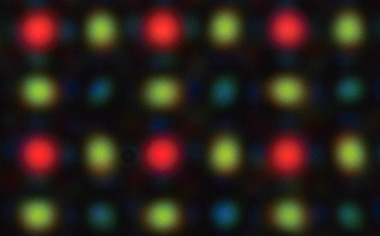 A project at NTT Device Technology Laboratories, part of Japan's NTT Corporation, has developed a metalens able to sort primary colors and act as a pixel-scale color splitter.

Devices with this capability could be valuable for image sensors in multiple applications, as an alternative to architectures that require a separate color filtering operation to take place on each pixel of the sensor and which inevitably limit the amount of light detected.

"Traditional imaging sensors such as the ones used in smartphones, wearable devices and autonomous vehicles have a limited sensitivity, because they rely on color filters placed over each pixel," said Masashi Miyata from NTT Device Technology Labs.

"Our new metalenses are made from a highly-engineered surface that can collect light while simultaneously separating primary colors without any color filters, opening a pathway to dramatically improve sensitivity."

The new component is further evidence of the versatility of metalenses and metamaterials, in which nanoscale modifications to optical surfaces have been exploited to create useful non-classical behavior. Recent examples have included the creation of a tunable metalens able to focus on objects at two distinct distances without changes to the shape or position of the lens, thanks to the creation of more than one type of nanostructure on the same substrate.

Most metasurfaces have employed nanoscale pillars which interact with incident light to create the observed effects, but research at Harvard SEAS has shown that a surface patterned with holes instead can produce a more robust flat metalens able to focus incident infrared light into a diffraction-limited spot.

Although pixel-scale color splitting approaches have been previously demonstrated, they were not practical for consumer devices because they were either inefficient, affected by the light's polarization or sensitive to light hitting the sensor from an oblique angle, according to the researchers.

The NTT architecture was based on 1250-nanometer dielectric nanoposts created in three individual forms - filled squares, unfilled squares with an open center, and crosses - on a fused-silica substrate. The various four-fold symmetry cross-sections created by this layout can diversify phase dispersions without sacrificing polarization-insensitive operation, according to NTT, which designed the metalens array so as to focus red, green and blue light to different points on a high-density image sensor.

In trials comparing the new architecture with a conventional filter-based sensor, the metalens generated color images without sacrificing color quality and enhanced the signal received by a factor of 2.8. Optical simulation studies showed that the new approach exhibited less image degradation due to sensor noise, which is often the limiting factor in dark-scene or ultra-fast imaging, noted NTT.

"We envision our metalenses playing an important role in the development of filter-free color image sensors that exceed current sensitivity limits," said Miyata. "These new sensors could one day let people more easily capture night views with smartphones or enable new cameras that accurately capture high-speed objects, which will be useful in security and autonomous driving."