High-power bursts of light from femtosecond system are being honed for new compact particle accelerators. 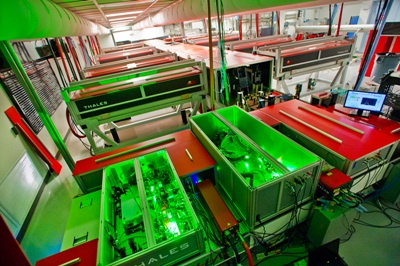 BELLA laser at the Berkeley Lab

An ultrafast laser system under development at the Lawrence Berkeley National Laboratory (LBL) in California has delivered petawatt bursts of light at an unprecedented repetition rate of one pulse per second.

The Berkeley Lab Laser Accelerator (BELLA), said to be “nearing completion”, is expected to drive what will become the very first laser plasma accelerator to produce a beam of electrons with an energy of 10 GeV – enough to drive a so-called “table-top accelerator” to be used for high-end scientific studies that typically need a much larger system.

BELLA is based on chirped-pulse amplification (CPA), the technique for generating high-power, ultrashort pulses of light that was first developed by Gerard Mourou and colleagues back in the 1980s – and which is now used in many of the world’s highest-power lasers.

Stretch; amplify; compress
In the BELLA CPA design, energy from a dozen pump laser sources is stretched, amplified and compressed with the aid of titanium sapphire crystals to generate high-power femtosecond pulses.

Although other lasers have reached the petawatt regime previously – notably the Vulcan laser at the UK’s Rutherford Appleton Laboratory and the Gekko XII facility in the Institute of Laser Engineering at Japan’s Osaka University – none have operated at a high repetition rate.

What team leader Wim Leemans and colleagues at LBL’s Accelerator and Fusion Research Division (AFRD) have been able to achieve now is a combination of ultrashort high-power pulses at a rate of one pulse per second. In comparison, the Gekko petwatt beam line produces only three of four shots per day.

According to Leemans, it is the availability of high-repetition-rate pump lasers (GAIA-HP) developed by commercial partner Thales, and the mitigation of transverse lasing in large-aperture Ti:sapphire crystals that have made the latest breakthrough possible.

“The previous generation of pump lasers of this kind was [able to deliver] a shot every minute, or slower,” Leemans told optics.org.

NIF comparisons
The petawatt power reached by BELLA is double the 500 terawatt level that was recently reported by the National Ignition Facility (NIF) team at the nearby Lawrence Livermore National Laboratory (LLNL), although in reality the two giant laser systems are very different.

For one thing NIF, which is aiming to recreate the stellar fusion process on Earth, delivers its power over a much longer time period – though still only a few nanoseconds – and therefore carries a much higher dose of energy to its target.

In the most recent set of experiments publicized by NIF, the 192-beam system delivered some 1.8 megajoules, compared with around 40 joules rom BELLA.

However, the long-term plans at NIF are to develop a next-generation system with a high-repetition rate of perhaps around 10 Hz, so that the laser-based inertial confinement fusion approach can be used as the basis for a nuclear fusion power station – perhaps meaning that there is something for the team there to learn from the work at BELLA.

Leemans says that although BELLA and NIF are very different laser systems, future generations of both would be pumped by diode lasers, meaning that there is the potential for some synergy here.

The senior scientist adds that the 1 Hz repetition rate now demonstrated with BELLA is “ideal” for the planned 10 GeV proof-of-principle accelerator experiments. “Future systems for applications would require 100 Hz to kilohertz, and beyond, which will require a revolutionary different laser design and technology,” Leemans said.

Further improvements to the record-breaking performance are expected soon, and experiments to demonstrate BELLA’s ability to attain 10 GeV electron beams are scheduled to begin this fall.