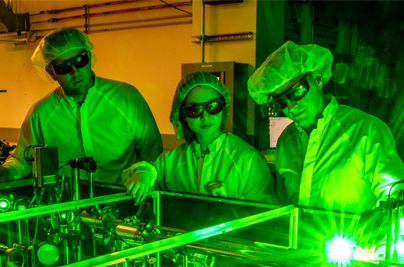 Laser stabilization experiment with one of the BELLA Center’s 100TW lasers.

The Berkeley Lab Laser Accelerator (BELLA) Center at the Department of Energy’s Lawrence Berkeley National Laboratory, in California, has developed an optical system to precisely measure and control the position and pointing angle of high-power laser beams – without interrupting or disturbing the beams.

The experimental validation effort was led by doctoral candidate Fumika Isono of Berkeley Lab and UC Berkeley. Her findings are described in High Power Laser Science and Engineering.

“This is a tremendous advancement in measurement and control that will benefit high-power laser facilities worldwide,” said Cameron Geddes, Director of Berkeley Lab’s Accelerator Technology and Applied Physics Division, of which the BELLA Center is a part.

Laser users with demanding applications find that laser beams move around at a tiny scale in response to the vibrations and variability of even the most controlled lab environment. “Missing the target by as little as a few microns can make the difference between amazing science and an unwanted addition to background noise,” said Isono.

Traditional measurement methods either greatly sap the power of the beam by intercepting its pulses or suffer inaccuracies because they are not measuring the beam exactly as delivered. The BELLA Center’s innovative approach involves splitting off and monitoring a low-powered exact copy of the main beam, reflected from the rear surface of a specially designed final optic in the beam line.

The heart of this new approach is a laser architecture with three key attributes. First, it simultaneously provides five high-power pulses and a thousand low-power pulses per second, all following the same path. Second, the beamline design is optimized to keep the high-power and low-power pulses matched in size and divergence. Finally, it replaces one of the reflective beam line mirrors with an innovative wedge-shaped reflector that has specialty coatings on both the front and the rear surfaces.

A tiny part of the beam, representing perhaps 1% of the input power, propagates through the front surface and is reflected off the rear surface. This so-called “witness beam” goes through any subsequent optics almost in parallel to the main beam, with just enough diversion for easy placement of measurement instruments. The result, said Isono, is “a measurement that won’t interfere with the main laser beam, yet very accurately tells us about it.” 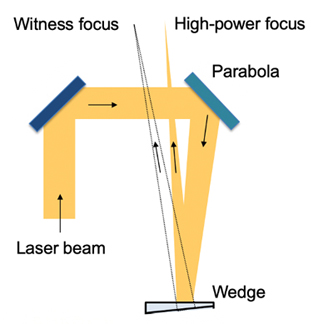 A wedge-shaped optic is the heart of Berkeley Lab innovation.

A near-future goal is using this diagnostic technique as part of a feedback system for active stabilization of the laser’s transverse position and pointing angle. Preliminary studies with the 100-terawatt laser at BELLA Center have been promising.

The paper in High Power Laser Science and Engineering describes the prospect of removing the jitters on the high-power 5Hz laser by actively stabilizing the low-power 1kHz laser pulse train. Laser beam vibration and motion was observed to occur on a scale of a few tens of hertz, which is well within the range of a practical feedback system. A fivefold improvement in position and angle of high-power laser pulse delivery is expected.

One immediate application at the BELLA Center is the use of a laser-driven plasma accelerator (LPA) to provide electron beams for a free-electron laser (FEL) – a device that produces bright photon pulses at a far higher energy and shorter wavelength than visible light. “The undulator, the magnetic array at the heart of the FEL, has very strict requirements on electron beam acceptance, which directly relates to the LPA drive laser pointing angle and transverse fluctuations,” said Isono.

The proposed kBELLA, a next-generation laser system that will combine high power with a kilohertz repetition rate, will be another likely application.