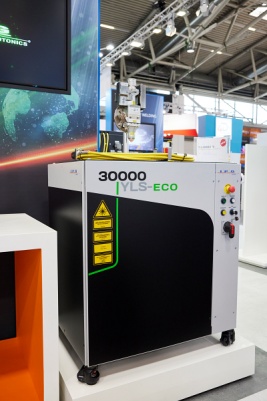 For the three months ending September 30, the Massachusetts-headquartered firm reported revenues of $349 million, down 8 per cent on the same period last year - although that was largely due to the impact of the strong US dollar. Operating income of $93.2 million was down by a similar degree.

Despite that, and what CEO Eugene Scherbakov described as a challenging operating environment, with overall demand dropping in Europe and still impacted by Covid-related lockdowns in China, he remains positive - in particular when it comes to EV battery and solar cell manufacture.

“We are seeing accelerating investments in lithium ion batteries used in EVs globally, and expect to benefit from continued higher sales to EV applications in the next several years.”

EV investment cycle
Illustrating the momentum in the fast-growing sector, he pointed out that EV-related applications accounted for approximately 20 per cent of sales, or $70 million, in the latest quarter.

That proportion has increased from 10 per cent a year ago, with Scherbakov claiming that IPG’s quasi-continuous-wave lasers featuring an adjustable-mode beam were displacing more expensive blue and green laser options.

“To focus on global EV opportunities, we implemented some organizational changes and increased our sales and marketing capabilities.” the CEO told an investor conference call discussing the latest results.

“There are additional investments into EV batteries planned in Europe and North America and we are seeing increased activity in the US due to the recently announced government incentives.”

Scherbakov also pointed to industry estimates suggesting that global lithium ion battery capacity will triple by 2025 and may even reach 6 TW by 2030 - equivalent to a seven-fold increase over the 2021 total.

“We expect the EV investment cycle to continue and e-mobility sales to remain strong in the next 3-5 years, despite [a] less favorable outlook for the global economy in the near term,” said the CEO.

Medical demand; solar rebound
IPG is still in the process of diversifying away from its traditional cash-cow of laser-based cutting tools in China, with applications in photovoltaics, additive manufacturing, and medicine all offering growth at the moment.

As a result, sales from medical applications look set to reach $70 million this year, up from $43 million in 2021, with recurring sales from consumable fibers contributing to revenue growth.

“We also saw strong demand in our green lasers for solar cell manufacturing applications,” pointed out the CEO. “This market is rebounding, driven by increasing investments in renewable energy solutions globally.”

Part of the reason for that rebound is the inflated cost of gas and oil resulting from Russia’s ongoing invasion of Ukraine - something that is about to have an additional impact on IPG’s own operations.