“Picophotonics waves” can propagate in semiconductors such as silicon. 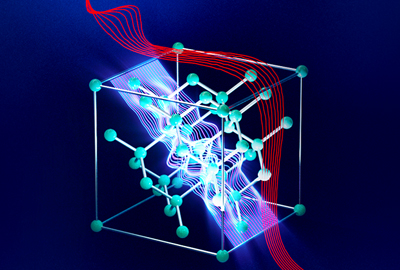 Picophotonics in the 3D lattice of silicon atoms. Click for info.

Researchers at Purdue University, Indiana, have discovered a new type of waves with picometer-scale spatial variations of electromagnetic fields which can propagate in semiconductors like silicon.The research team, led by Dr. Zubin Jacob, Elmore Associate Professor of Electrical and Computer Engineering and Department of Physics and Astronomy, published their findings in APS Physics Review Applied in a paper titled Picophotonics: Anomalous Atomistic Waves in Silicon.

“Our work is for light matter interaction within the picoscopic regime, where the discrete arrangement of atomic lattices changes light’s properties in surprising ways,” said Jacob. The findings demonstrate that natural media host a variety of rich light-matter interaction phenomena at the atomistic level, the group said.

The Purdue announcement stated, “The use of picophotonic waves in semiconducting materials may lead researchers to design new, functional optical devices, allowing for applications in quantum technologies.

“Over the past decade, nanophotonics has led to important advances. This existing research can be captured within the realm of classical theory of atomic matter. The current finding leading to picophotonics was made possible by a major leap forward using a quantum theory of atomistic response in matter,” it continued.

The long-standing puzzle in the field was the missing link between atomic lattices, their symmetries and the role it plays on deeply picoscopic light fields. To answer this puzzle, the theory team developed a Maxwell-Hamiltonian framework of matter combined with a quantum theory of light induced response in materials.

Jacob commented, “This is a pivotal shift from the classical treatment of light flow applied in nanophotonics. The quantum nature of light’s behavior in materials is the key for the emergence of picophotonics phenomena.”

Bharadwaj and colleagues showed that hidden amidst traditional well-known electromagnetic waves, new anomalous waves emerge in the atomic lattice. These light waves are highly oscillatory even within one fundamental building block of the silicon crystal (sub-nanometer length scale).

“Natural materials itself have rich intrinsic crystal lattice symmetries and light is strongly influenced by these symmetries,” said Bharadwaj. “The immediate next goal is to apply our theory to the plethora of quantum and topological materials and also verify the existence of these new waves experimentally.”

This research was funded by the DARPA QUEST program.