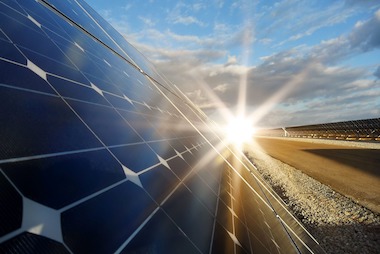 Recent advances in materials and manufacturing have steadily increased the power conversion efficiencies that OSCs are capable of, exploiting modifications to the chemical structures such as those developed at Fraunhofer ISE when it achieved a level of 14.9 percent in 2020.

Current efficiency levels have moved past 19 percent, but combining this performance with long-term material stability and the manufacture of large surface areas has remained challenging.

A project at the University of Erlangen-Nuremberg (FAU) has now studied how to optimize the structure of an OSC with a view to maximizing the stability and working lifetime of the resulting solar cells, by selecting the best material for the semiconductor layers.

As published in Nature Energy, the findings indicate the trade-offs between material selection and operating life available to OSC developers.

"If we use polymers with very long chains of molecules, the modules are robust against fluctuations in temperature and have a longer operating life," commented Christoph Brabec from FAU and the Helmholtz Institute Erlangen-Nürnberg for Renewable Energy (HI ERN). "However, polymers are not very well defined and have more defects due to their complexity, which can lead to lower output in low light levels."

Research into suitable materials at HI ERN has focused on oligomers, whose shorter molecular chains can be precisely controlled and which can demonstrate a higher efficiency in near-infrared light than longer polymer chains. Oligomers are also more sensitive to temperature fluctuations, however, and generally less stable.

The project zeroed in on low-molecule non-fullerene semiconductors and derivatives of a particular material named Y6, known to be capable of impressive power conversion efficiencies when used in OSCs. Fine tuning of the molecular structure produced an oligomer with the abbreviation OY3, which has an average performance efficiency of 15 percent combined with excellent photostability.

"By altering the molecular chain length we modify the thermal properties, crystallization behaviours and molecular packing, and achieve an optimal microstructure and a more stable morphology," said the team in its published Nature Energy paper. "A combination of efficiencies over 15 percent and an extrapolated lifetime over 25,000 hours is achieved for binary OSCs based on an oligomer acceptor."

According to FAU the oligomer retained 94 percent of its original output after 200 hours of operation. For an average operation of 1,500 hours per year, an operating life of 25,000 hours equates to more than 16 years of use.

The research also suggests ways to improve the operational life of OSCs generally, through tuning the molecular packing behaviors and blend morphology of oligomers and the potential development of novel non-fullerene acceptors for stable and efficient cells.

"These parameters are unique for multi-layer organic photovoltaic modules and fulfill all requirements for rapid commercialization," said Christoph Brabec. "Our strategy of targeted oligomer design takes organic photovoltaics to a new level of efficiency and brings them very close to practical application."