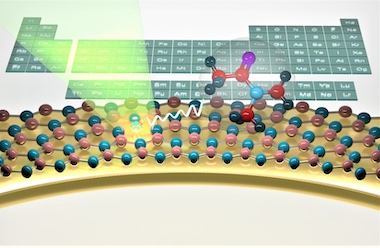 A project at Australia's RMIT University and the University of Technology Sydney (UTS) has developed a quantum microscopy platform that could offer new ways to probe material properties and physical processes.

Quantum sensors based on nitrogen-vacancy centers in diamond, such as those already investigated at RMIT, are known to be potentially sensitive instruments for measuring specific physical properties, thanks to their ability to respond to electromagnetic fields or other stimuli.

However, to date using such solid-state spin sensors as microscopy instruments has meant relying on quantum defects hosted in rigid 3D crystals such as diamond, limiting the ability to interface closely with a sample.

As published in Nature Physics, the new approach uses point defects embedded within a thin layer of hexagonal boron nitride (hBn), rather than a more bulky crystal.

As a van der Waals material, hBn consists of two-dimensional layers of material, held more weakly into 3D structures. Utilizing a van der Waals sensor could allow a quantum mcroscopy approach to be applied to samples and targets that were previously inaccessible.

"This van der Waals material, made up of strongly bonded two-dimensional layers, can be made to be very thin and can conform to arbitrarily rough surfaces, thus enabling high resolution sensitivity," said Igor Aharonovich of the UTS. "These properties led us to the idea of using 'quantum-active' hBN foils to perform quantum microscopy, which essentially is an imaging technique that utilises arrays of quantum sensors to create spatial maps of the quantities they are sensitive to.

In trials, the project used its hBn material to carry out quantum sensing on chromium ditelluride, CrTe2, a van der Waals ferromagnet with a critical temperature just above room temperature and a potentially significant material in future ferromagnetic-based devices.

According to the project's paper, a thin flake of hBn containing a high density of desired defect centers was placed on the sample, and the defects excited with a laser and a microwave field. Their photoluminescence is influenced by local parameters such as temperature and magnetic field strength, providing an insight into the sample's properties and condition.

"The hBN-based quantum microscope was able to image the magnetic domains of the ferromagnet, with nanoscale proximity to the sensor and under ambient conditions, something that was believed to be impossible to date," commented the project team. "Utilising the unique properties of the hBN defects, a simultaneous temperature map was recorded, confirming that the microscope can be used to perform correlative imaging between the two quantities."

Future applications could see this principle applied to MRI and NMR imaging of chemical reactions, as well as to uses in remote sensing and imaging applications.

"There is a huge potential for this new generation of quantum microscopy," said Mehran Kianinia from UTS. "Not only can it operate at room temperature and provide simultaneous information on temperature, electric and magnetic fields, it can be seamlessly integrated into nanoscale devices and withstand very harsh environments, as hBN is a very rigid material."