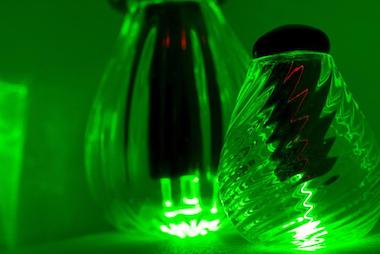 Through a glass magnetically: diamond particles

A project led by Australia's RMIT University has demonstrated how glass fiber doped with fluorescent microparticles can act as a magnetic field sensor.

The breakthrough, published in APL Materials, could potentially allow such sensors to be more easily fabricated and deployed, opening up new applications in quantum metrology.

It builds on the ability of a particular point defect in diamond, a nitrogen-vacancy (NV) center, to generate useful photoluminescence, and how that luminescence can be manipulated using outside electromagnetic fields or other irradiation, turning the NV center into an optically addressed sensor.

The potential for these centers to be built into quantum information systems as magnetic field sensors has been known for some time. A 2018 European project coordinated by Fraunhofer IAF investigated the use of NV-doped diamond as a lasing medium for a technique termed laser threshold magnetometry, described to Optics.org at the time as "a new approach to sensing."

The problem to date has been that most NV sensors require microscopes to collect the fluorescence signals, in turn involving relatively complex experimental platforms and limiting the procedure to laboratory settings.

RMIT had earlier used a volume doping technique to integrate fluorescent diamond nanoparticles into a glass matrix at the bulk raw material stage, to create a optical fibers with nanodiamonds dispersed inside the whole fiber volume. The new breakthrough involves a modified doping method, which confines micron-scale diamond particles at an angular interface within the fiber cross section, limiting the NV fluorescence to the fiber's central region and assisting with signal collection along the fiber.

One inspiration came from a glass artist's decorative work with nanodiamonds, after Adelaide glass blower Karen Cunningham was given some of the team's larger 50-micron diamonds to work with. Both the artist and the scientists noted that the diamond particles were unaffected by the glass blowing operation, and successfully provided decorative effects to manufactured glass items.

"For us, it was the lightbulb moment and we knew we could make diamond sensors in more conventional glass fibers," said Heike Ebendorff-Heidepriem of project partner the University of Adelaide.

The team's eventual doped fiber manufacturing process is a two-stage operation. First glass is extruded into a cane, which is then coated on the outside with diamond particles. The coated cane is then inserted into a separate hollow glass tube, before this two-component assembly is drawn down into a diamond-doped optical fiber.

In trials, luminescence spectroscopy and electron spin resonance characterization showed that the optical properties of NV centers in the diamond microcrystals are well preserved throughout the fiber drawing process, according to the project. The team demonstrated a working NV-spin magnetic resonance readout through 50 centimeters of fiber.

Such fibers could now allow the scalable fabrication of fiber-based diamond sensors for a number of field-deployable quantum metrology applications.

“This allows us to make cheap quantum sensor networks that are able to monitor changes in magnetic field, with many useful applications and the answers to questions we haven’t thought of yet,” said Dongbi Bai of RMIT University.