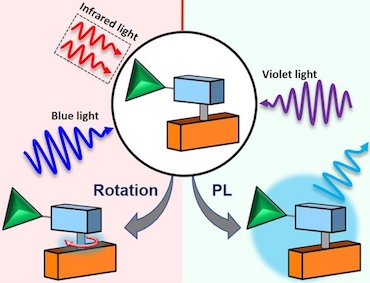 Two functions in one motor

Rotary molecular motors whose motion is controlled by light have been a topic of research for some time, with potential applications in synthetic mechanical systems and nanoactivation.

Their versatility has led to different approaches to device design and power. One example from the University of Würzburg involved constructing micron-scale machines with up to four independently addressable nanomotors embedded in the structure, analogous to the rotors on aerial drones.

Using such tiny devices in biological systems or inside blood vessels is naturally attractive, but their suitability has to date been hindered by the limited penetration of light into many organic tissues, and difficulties in tracking where the molecular motors are actually located as they maneuver.

A project at the University of Groningen (UG) has now created molecular motors in which light stimulation produces not just powered motion but fluorescence as well, combining two light-mediated functions in single molecules. The findings were published in Science Advances and Nature Communications.

Usually, two such photochemical events are incompatible in the same molecule. Either the light-driven motor operates and there is no fluorescence, or there is fluorescence and the motor does not operate, according to the UG team.

"After the successful design of molecular motors in the past decades, an important next goal was to control various functions and properties using such motors," said UG's Ben Feringa, who shared the 2016 Nobel Prize in Chemistry for the development of molecular motors. "As these are light-powered rotary motors, it is particularly challenging to design a system that would have another function that is controlled by light energy, in addition to the rotary motion."

Two solutions to the problem were developed by the UG project. In one, a photoluminescent dye was chemically attached to the molecular structure perpendicular to the upper part of the motor, influencing the conjugation of the molecular system is ways which prevent the two functionalities from blocking each other, so that rotary motion and light emission took place.

This had the added advantage that changes to the solvent environment used can alter the balance between the two functions, effectively making the motor sensitive to its surroundings.

The other approach was based on an existing motor design driven by two-photon absorption, in which a photosensitive molecular antenna collects incident infrared photons to drive the engine. Modifications to the antenna allowed it have two excited states, one in which its energy is transferred to the motor and another in which the molecule glows through fluorescence instead.

UG's research represents the first set of artificial molecular motors displaying dual function of rotation and long-lived photoluminesence, a combination that could expand potential applications for the technology.

"This is very powerful, and we might apply it to show how these motors might traverse a cell membrane or move inside a cell, as fluorescence is a widely used technique to show where molecules are in cells," commented Feringa. "We could also use it to trace the movement induced by the light-powered motor, or trace motor-induced transport on the nanoscale. This is all part of follow-up research."