Winning trio from Europe and USA are recognized for “setting in motion quantum information science”. 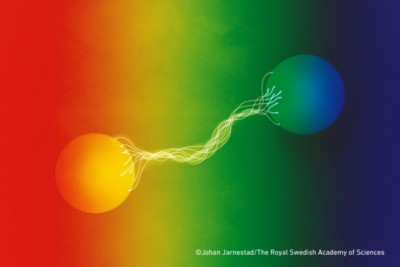 Entanglement has become a powerful tool. Click for full info.

The Nobel Prize in physics was awarded in Stockholm this week to researchers from France, Austria and the U.S. who study the “spooky” behavior in physics called quantum entanglement, useful in encryption, computing, sensing and many other corners of industry.

The winners – who will divide the total prize of 10 million Swedish kronor, or just under one million US dollars – were named as:

The Royal Swedish Academy of Sciences awarded the Physics prize to the trio “for experiments with entangled photons, establishing the violation of Bell inequalities and pioneering quantum information science”. Their work testing the Bell theory showed that a photon can show up in detectors in two separate places, and these objects are, thus, “spookily entangled,” according to a NOVA television documentary, just as quantum mechanics had predicted. The particles interact even if they are far apart.

These “spooky connections” will have major impacts on technology, pointing toward a possible quantum computing market of $2 billion to $3 billion in the years ahead. Because the theory points to highly secure communication, the applications are expected to flourish in banking and finance.

Interviews with The Associated Press

“It's so weird,”Aspect said of entanglement in a telephone call with the Nobel committee. “I am accepting in my mental images something which is totally crazy.”

“Why this happens I haven’t the foggiest,” Clauser told The Associated Press during an interview in which he received the official call from the Swedish Academy. “I have no understanding of how it works but entanglement appears to be very real.”

His fellow winners also said they can't explain the how and why behind this effect. But each did ever more intricate experiments that prove it just is.

Clauser, 79, was awarded his prize for a 1972 experiment, cobbled together with scavenged equipment, that helped settle a famous debate about quantum mechanics between Einstein and famed physicist Niels Bohr. Einstein described “a spooky action at a distance” that he thought would eventually be disproved. “I was betting on Einstein,” Clauser said. “But unfortunately I was wrong and Einstein was wrong and Bohr was right.”

Speaking by phone to a news conference after the announcement, the University of Vienna-based Zeilinger said he was “still kind of shocked” at hearing he had received the award.

The Associated Press stated that Clauser, Aspect and Zeilinger have figured in Nobel speculation for more than a decade. In 2010 they won the Wolf Prize in Israel, seen as a possible precursor to the Nobel.

The Nobel committee said Clauser developed quantum theories first put forward in the 1960s into a practical experiment. Aspect was able to close a loophole in those theories, while Zeilinger demonstrated a phenomenon called quantum teleportation that effectively allows information to be transmitted over distances.

At the University of Arizona’s Wyant College of Optical Sciences, in Tucson, which has emerged as a key player on the frontiers of quantum computing, several researchers were celebrating the Nobel choices.

Saikat Guha, a professor of optical sciences, electrical engineering and applied mathematics, said entanglement among “distant parties” will be “the new information currency for the quantum information era.”

Guha, who directs the Center for Quantum Networks (CQN), an Engineering Research Center funded by the US National Science Foundation, added: “Shared entanglement enables teleporting quantum states from one point to another, with additional assistance of classical communications between the parties as an ancillary resource.

“Prof. Zeilinger, one of the Laureates, demonstrated teleportation of the state of single qubits, and also showed how shared entanglement can be turned into shared secret keys which would enable secure communications whose security promises derive from the laws of quantum physics being true,” he said

“Entanglement shared across global scales will enable quantum computers to work together to solve complex problems that are inaccessible with today’s supercomputers,” Guha added. 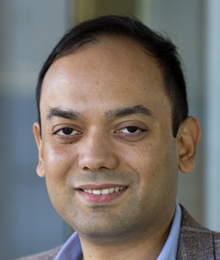 Some future applications of these quantum breakthroughs include: simulating the complex quantum chemistry of biological systems leading to new insights about nature and drug discovery; and solving hard combinatorial optimization problems with relevance to airline and autonomous-vehicle routing, job scheduling, inventory and fleet management, and smart cities of the future.

Distributed entanglement, Guha said, will string together far-flung optical telescopes to work together into a “long baseline with an effective resolving power that cannot be matched by any conventional telescope humankind is unlikely to ever build, enabling peering deep into the universe.”

Meanwhile, Stephen Fleming, director of strategic partnerships and innovation at CQN, said on Tuesday, “It’s been an exciting day for us in CQN, since the Nobel Prize was awarded to three scientists who helped establish our field of quantum information science. By proving that photons can be entangled, the three new laureates laid the foundation for a new generation of computing, telecommunications, and sensing technologies.”

Quantum computers, Fleming added, raise the possibility of quickly and economically breaking most common encryption mechanisms, which underpin everything from banking to medical records to navigation to cryptocurrencies. Quantum networks “promise an inherently-secure communications mechanism that will allow the safe transmission of information, even when attacked by adversaries with quantum computers.”

These networks based on quantum entanglement will initially be used for high-value security applications, Fleming said. “New products will appear in banking, manufacturing, communications, medicine, and more,” he added.

“It’s still very early in the world of developing products and services based on quantum entanglement. Many of the devices only operate at supercold temperatures, a fraction of a degree above absolute zero, inside complex and finicky laboratory installations.” A goal of CQN, said Fleming , “is to migrate those capabilities into computer chips that can operate at much higher temperatures—either liquid helium or even liquid nitrogen.”

“Developing more robust commercial-grade quantum sensors and quantum networks will take most of the next decade. The highest value applications will emerge first, in military and financial transactions. Consumer-oriented applications will come later. That’s the same evolutionary path we saw with the Internet, and we expect history will repeat itself. But maybe a little faster this time.”