Quantum tech rises up the agenda at LASER World of Photonics 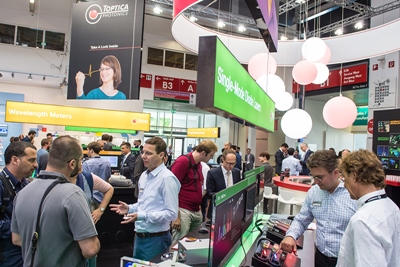 Organizers of the forthcoming LASER World of Photonics congress say that the event will bring together a host of “leading players” in the emerging field of quantum technology – including a plenary talk by Anton Zeilinger, one of the world’s leading experts in quantum encryption and quantum key distribution (QKD).

Zeilinger is scheduled to give a talk entitled “Photonic entanglement: from foundations to applications” on the morning of Tuesday June 25, as a centerpiece of the European Quantum Electronics Conference (EQEC), one of several optics-related technical events co-located at the long-running Munich show.

"Zeilinger will give an insight into the latest research by the Austrian Academy of Sciences’ Institute for Quantum Optics and Quantum Information in Vienna," say organizers Messe München.

The accompanying technology exhibition will also feature two application panel sessions dedicated to optical quantum technologies – the first covering sensing and computing, the second imaging and communication. Both panels will take place Wednesday June 26, and each will be co-chaired by senior executives from the local laser and photonics company Toptica.

Strategic Advisory Board
Toptica is closely involved with the new Quantum Technologies Flagship project in Europe, which officially kicked off in October 2018. The flagship is set to receive around €1 billion in European Commission funding over the coming decade.

Earlier this month, the flagship’s strategic advisory board was revealed, with Airbus, Ericsson, and Infineon Technologies among the corporate organizations named. Individual members of the board also include Peter Loosen, deputy director of the Fraunhofer Institute for Laser Technology (ILT).

More recent developments relating to the flagship effort include the signing of a technical agreement on quantum communication by the European Space Agency (ESA) and the "DG Connect" digital technologies section within the European Commission.

The plan is to collaborate on designing a quantum communication infrastructure for future “ultra-secure” communications in Europe, based on the principle of QKD.

Magali Vaissiere, ESA’s director of telecommunications and integrated applications, said in response to that agreement: “Only by stimulating innovation can Europe place itself at the forefront of technology; and nowhere is this more critical than in the field of secure communications.

“It is our shared ambition to demonstrate that space-based solutions can provide a vital part of the European quantum communication infrastructure. The ESA is therefore making available its expertise in satellite and optical communications, in order to meet the technological challenges of delivering QKD services, which are not achievable by terrestrial solutions alone.”

Satellite QKD
EQEC plenary speaker Anton Zeilinger and his team in Vienna have already been pioneering efforts to develop satellite-based intercontinental QKD, working with partners at the Chinese Academy of Sciences and their “Micius” research satellite to exchange quantum keys between ground stations in Austria and China.

In late 2017, the team used the keys to carry out a video conference via a conventional internet connection. “Due to the laws of quantum physics, it was impossible for third parties to ‘hack’ into the data exchange,” reported the researchers at the time.

“The exchange of quantum encrypted information over intercontinental distances confirms the potential of quantum communication technologies as opened up by fundamental research,” added Zeilinger. “This is a very important step towards a worldwide and secure quantum internet.”

Aside from Zeilinger’s address and the two quantum application panel sessions, the Munich event will feature a whole host of exhibitors both working on such applications, and selling photonics-based equipment that those techniques rely on.

As some of the key participants, Messe München highlights the presence of private-sector participants including Toptica, Menlo Systems, and ID Quantique, as well as research and development institutes such as the Glasgow, UK-headquartered QuantIC quantum imaging “hub”, and the new Jena Innovation Center for Quantum Optics and Sensor Technology.