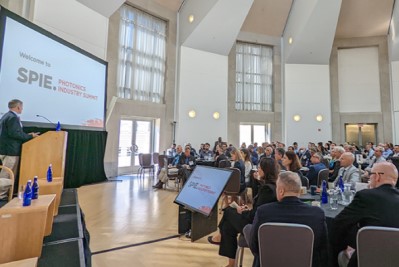 SPIE Summit: leaders from both the optics and photonics sectors listen.

Following passage of the U.S. CHIPS Act, signed into law by President Joe Biden in August, 2022, leaders of the optics and photonics industry wasted no time cementing their participation in rolling out the Administration’s hallmark legislative achievement to revive semiconductor manufacturing in the country.

They participated in the first SPIE Photonics Industry Summit, held on 21 September in Washington, DC.

SPIE began organizing the summit when the CHIPS Act was still winding its way through Congress and faced an uncertain future. Once it became law with broad bipartisan support, however, the need for dialogue between government and industry became paramount.

In the US, the CHIPS Act has prompted renewed focus on the interplay of government and industry in a market economy and how both sectors can work toward common goals. Indeed, not since World War II has the US embarked on such a massive effort to build world-leading industrial capacity.

The CHIPS Act is set to unleash billions of dollars in federal funding, and with the possibility of more to come, to jump start advanced semiconductor R&D, fabrication-facility infrastructure, and workforce development—all within US borders.

“The CHIPS Act is a blueprint for long-term, sustained commitment to science and technology,” said Kei Koizumi, principal deputy director for policy at the White House Office of Science and Technology Policy (OSTP), in the opening talk of the summit. “We hope the optics and photonics community will make your voices heard,” he added, noting that Congress will still need to appropriate funds to pay for many of the goals set forth in the Act. “You need a policy bill. But you also need the money to follow it up. We need everyone to participate in implementing this landmark legislation,” Koizumi said.

NIST Director Laurie Locascio pointed out that 93 percent of global trade is impacted by global technical standards, many of them set by her agency with its focus on measurement and technical standards excellence. But it’s not a top-down approach, she said, and the agency has long recognized that for the US to keep its technical standards leadership there must be coordination with industry.

Locascio also noted that NIST’s work in optics and photonics “is as old as the agency itself,” including the areas of fundamental research, metrology, setting reference standards, and more. “I want to start by acknowledging that SPIE has been a tremendous partner for NIST over the years. And, as many of you may know, Dr. Kent Rochford was formerly at NIST [before joining SPIE as CEO]. It’s such a pleasure to continue working together.” 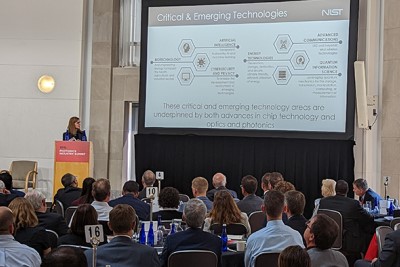 NIST’s focus on measurement and standards is “essential in emerging technology areas and those we have yet to imagine,” Locascio continued. She noted that among the challenges arising from the CHIPS Act, a main effort would be to keep those technologies cemented in the US while still working with international partners who share US values and avoid setting off a chips “arms race.”

Meanwhile, at NIH, innovation in optics and photonics impacts health and wellbeing—and the healthcare industry. SPIE Fellow Bruce Tromberg, director of the National Institutes of Biomedical Imaging and Bioengineering, told summit attendees that 66 percent of NIBIB grants are for developing or using optics and photonics technologies.

Tromberg said the Covid-19 pandemic has highlighted, for example, an urgent need for AI and machine learning to understand and map the spread of contagious diseases and more recently, to understand the phenomenon of long covid at the population level. NIBIB’s work during the pandemic also highlighted that US innovation in optics and photonics can meet critical needs in times of emergency, like the many point-of-care diagnostic tests for covid-19 now available.

“Whoever thought we would see quantum dots in diagnostic tests you can buy at CVS,” Tromberg remarked about one of the technology applications to emerge from the pandemic.

But, in an era of global competition, the R&D landscape is changing. “It’s a race for economic supremacy and science and technology is the basis,” Thyagarajan Nandagopal, who heads NSF’s new Directorate of Technology Innovation and Partnerships, told the summit. Challenges like climate change, social equity, critical infrastructure, and more demand new thinking, he said.

Nandagopal noted that while the CHIPS Act authorizes a doubling of NSF’s budget, giving it some $81 billion to spend until 2027, “Congress has to follow it up with the check,” meaning it needs to appropriate the funds. “NSF wants to shift to use-inspired research,” he said, and would like to provide services to researchers to enable use-inspired research.

To supplement government money, he said, for example, Intel is co-investing with NSF on workforce development for the semiconductor industry. “We want to repeat that in every other business sector.” But keeping R&D innovation at home, protecting intellectual property, and all-the-while safeguarding national security comes with a cost.

For example, “a year ago, none of us thought we’d be confronted with a war of aggression in Europe,” said Assistant Secretary of the Bureau of Industry and Security at the Commerce Department Thea Rozman Kendler. Her office, she told the summit, enforces export controls and sits at “the nexus of national security, technology, and the economy.”

She said export controls are having a powerful effect on the war by crippling Russia’s military capabilities, and that photonics is an industry right at the cutting edge of new paradigms for diplomacy, especially given Russia’s attack on Ukraine and heightened security and economic concerns with China. “We are deeply grateful to industry for its role in complying with our measures,” she said. 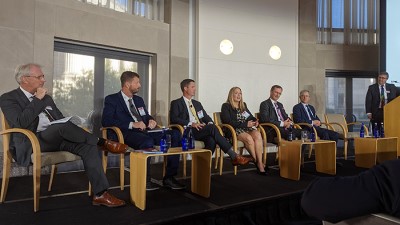 Discussing how the US Government and photonics industry can work together.

While the majority of the programming was designed for industry to hear from policy makers and implementers in government, the final discussion featured a panel of executives from leading optics and photonics companies. Coming from different sectors but all agreeing on the value photonics brings to the US technology ecosystem and economy. Providing value and helping to fulfill the promises of government science investment.

“Our industry enables solutions to some of the most fundamental challenges facing humanity but still has an opportunity to bring awareness of its impact to the general public,” said summit panelist and Edmund Optics CEO Sam Sadoulet. “The day provided a great mechanism for industry thought leaders and government representatives to explore how we may further collaborate.

The summit concluded with a networking reception that allowed for the spontaneous and invaluable conversations that SPIE events are known for. “SPIE did an amazing job getting together key industry and government leaders to share thoughts and ideas,” noted Energetiq CEO Debbie Gustafson. “The day equipped us with a much better understanding of the opportunities available and how to help drive the Optics and Photonics Industry forward.”