European Commission and industry commitment means Europe has not ‘missed the quantum train’. 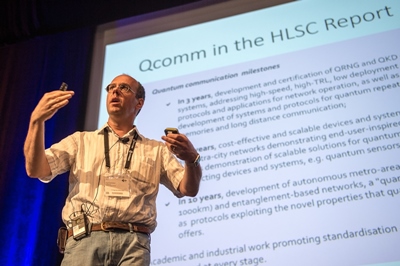 The emerging “second quantum revolution” took center stage on the opening day of SPIE’s Photonics Europe event, with optical technologies set to take on a key role as the increasingly competitive field develops.

During a packed keynote talk entitled “Launching the quantum flagship”, Ulm University professor Tomasso Calarco – also a member of the high-level steering committee that helped shape the billion-euro flagship European project on quantum technologies – said that despite strong global competition the continent had not “missed the train”.

Adding that the second quantum revolution was “unfolding now” Calarco said that Europe’s scientific and industrial expertise, coupled with the likelihood of further heavy backing via the European Commission (EC), would ensure it kept pace with quantum-related developments at giant US technology corporations and the Chinese state.

The Strasbourg, France, symposium also saw Calarco unveil the quantum flagship project’s dynamic new logo to the general public for the very first time, along with details of a new web site dedicated to the topic. Aimed at the fast-growing community of quantum technology developers, the site has been set up by the Quantum Support Action (QSA) initiative - which Calarco is himself co-ordinating.

Industry involved
On top of what the Ulm professor described as a “vibrant quantum technologies startup scene”, Europe is home to a number of large companies looking to play a major role in the future supply chain.

With the first round of quantum technology consortium proposals now received and under review, the flagship effort is scheduled to begin in earnest next January, when the winning proposals get under way.

Quantum technology was also under discussion in a high-level meeting hosted last week by German optics giant Zeiss, at its headquarters in Oberkochen. Broadcast live on Youtube, the meeting’s presentations are available to view here.

With strong funding commitments to quantum technologies now in place from individual governments across Europe, Calarco indicated that there was support within the EC to provide at least another billion euros of funding to further develop the technology as a part of the research framework program that will follow Horizon 2020.

Mission control
As-yet unnamed, that framework program looks very likely to be based around a set of key “missions”, contrasting with the largely bottom-up nature of Horizon 2020. Calarco highlighted that the recent EC-published report by economist Mariana Mazzucato on future research and innovation in Europe suggested a number of possible “mission-oriented” ideas in which quantum technology could feature heavily – and specifically mentioned quantum computing.