Imaging of hypoxia signals in near-infared can identify affected tissue. 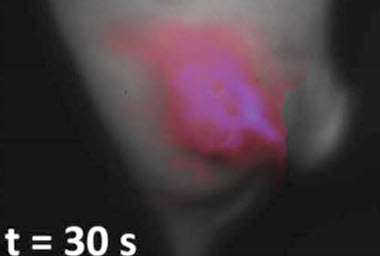 Fluorescence imaging variants are increasingly significant tools for clinicians seeking to determine the borders of malignant tissue during surgery.

Recent developments include the use of dual-wavelength optics to deliver key depth data, alongside determination of the lateral spread of tumors.

A project at Dartmouth College and the University of Wisconsin-Madison has now proposed an technique based on delayed fluorescence (DF), in which imaging of blood oxygenation provides a mechanism for image contrast. The work was published in Journal of Biomedical Optics.

The platform enables real-time imaging of tissue oxygen concentration for tumors presenting chronic or transient oxygen deficiency, or hypoxia, and does so making use of an endogenous molecule in the tissues called protoporphyrin IX (PpIX).

A known property of PpIX is that it responds to low oxygen concentration in its microenvironment, something often presented by tumors, with a relatively long-lasting or delayed fluorescence in the red to near-IR spectrum when suitably illuminated. However, using this phenomenon for real-time hypoxia imaging for surgical guidance had not previously been achieved, according to the project.

"This is a truly unique reporter of the local oxygen partial pressure in tissues," commented senior author Brian Pogue. "Healthy cells will show little to no DF, because it is quenched in the presence of molecular oxygen."

The technical challenge in detecting DF is its low intensity, with background noise making it difficult to detect without a single photon detector. Frame rates in the captured data have also tended to be slow, because of the limited signal captured in each time interval.

This effectively allowed signal detection from each type of emission to be captured sequentially, and only within a specified time window. An effective frame rate of 10 fps could be achieved using the technique.

In trials, the new platform was applied to mice models of pancreatic cancer which exhibited hypoxic tumors. The DF signal obtained from the cancerous cells was over five times stronger than that from surrounding healthy oxygenated tissues, according to the team, and the signal contrast was further enhanced when the tissues were palpated to enhance transient hypoxia even further.