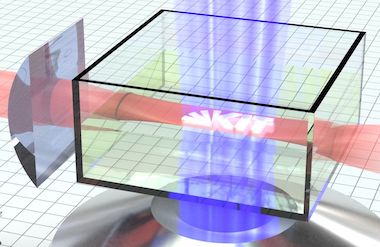 Two better than one: photoresin curing

A new approach to 3D printing developed at KIT's Institute of Applied Physics (APH) could allow microstructures to be created more rapidly at high resolution.

Named light-sheet 3D laser microprinting by the developers, it involves both two-color laser illumination and two-step absorption, along with the use of a particular photoresin recipe. The results were published in Nature Photonics.

Scanning-based nonlinear optical approaches to 3D printing have achieved voxel volumes below 1 cubic micron, but suffer from low printing speed or high cost because of the femtosecond lasers used, according to the project's published paper.

The photoresin employed is another factor. For rapid 3D printing the material must return quickly after illumination from its pre-activated state to the original state, since only then can the next layer be printed. Consequently the return time dictates the waiting interval between two successive layers, and the printing speed.

"For the resin we used, the return time was less than 100 microseconds, which allows for high printing speeds," said KIT's Vincent Hahn. But a special optical arrangement was required to take advantage of this property.

The light-sheet 3D laser microprinting architecture developed by KIT, working with partners including Heidelberg University, employs two continuous-wave laser sources: blue illumination at 440 nanometers and a red source at 660 nanometers, with the latter formed into a light-sheet orientation.

The blue light pre-activates the resin in specified locations related to the final desired geometry, then the red laser beam provides the additional energy needed to cure the photoresin at those points.

"In this printer, blue laser diodes are used to project images into the liquid resin using a high-resolution display with a high frame rate," noted the KIT project. "The red laser is formed into a thin light-sheet beam and crosses the blue beam vertically in the resin."

LEDs instead of lasers

In trials, the new platform achieved a peak printing rate of 7 × 106 voxels per second at a voxel volume of 0.55 cubic microns, according to the project's paper.

The project comes under the umbrella of 3D Matter Made To Order (3DMM2O), a research cluster formed by KIT and Heidelberg to develop novel 3D additive manufacturing technology. Previous work by the cluster led to the formation of Nanoscribe, a spin-out focused on high-resolution 3D printers and maskless lithography systems.

In May 2021 Nanoscribe became part of the life sciences firm Cellink, making Cellink "the only company in the life sciences industry with internal two-photon polymerization additive manufacturing capability," according to the company at the time. Cellink rebranded as the Bico Group later that year.

The new microprinting platform could now be optimized further by using new resin formulations, according to Martin Wegener of APH and 3DMM2O.

"With more sensitive resins, we could even use LEDs instead of lasers in our 3D printer," said Wegener. "Ultimately, we want to print 3D structures that are centimeters in size, while maintaining micrometer resolution and high printing speeds."