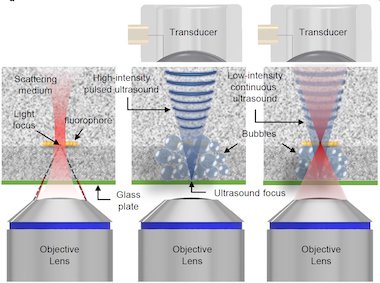 A project at Korea's DGIST research institute has developed a new route to optical clearing of tissues that could enhance the performance of laser scanning microscopy.

Optical clearing involves reducing the inherent light scattering behavior of tissues, in order to remove one of the main obstacles to direct optical imaging in organic systems.

Several different approaches to optical clearing exist, including the rendering of entire small animals transparent by the infusion of suitable polymers and solvents. But these techniques are time consuming and chemical-dependent.

DGIST took a different approach, based on the discovery in 2017 that micron-scale gas bubbles can be created in organic materials by high-intensity ultrasonic waves.

For the duration of their existence the bubbles reduce optical scattering and prevent light that propagates through them from changing direction, effectively increasing the depth penetration of the photons.

As described in Nature Photonics, the project has now developed ultrasound-induced optical clearing microscopy (US-OCM), combining the creation of gas bubbles with confocal fluorescence microscopy in the same platform, said by the project to be the first such device.

Previous investigations of ultrasound-generated gas bubbles have usually created only a sparse number of bubbles for individual study, but a more controlled production of a larger number of bubbles was needed for the same phenomenon to be of use in fluorescence microscopy.

The DGIST project therefore refined its ultrasound technology so that bubbles were generated by high-intensity pulsed ultrasound at a desired depth, and then subsequently maintained by low-intensity continuous ultrasound during imaging.

In trials using tissue phantoms and ex vivo samples, the project found that its US-OCM platform could increase the imaging depth by a factor of six or more, while the image resolution remained similar to that of conventional laser scanning microscopy.

DGIST commented that the US-OCM technique did not cause any damage to the tissue, and when the ultrasonic irradiation was stopped the generated gas bubbles disappeared, returning the optical properties to their previous state. This bodes well for ultimate use of the technique on delicate or living subjects.

"The technology secured through this study will be applied to various optical imaging techniques, including multiphoton microscopy and photoacoustic microscopy, in addition to several optical therapies such as photothermal and photodynamic therapies," commented Jin Ho Chang of DGIST. "This would enhance the application of those existing technologies, by increasing their image and treatment depth."