...as Lockheed Martin and Ayar Labs collaborate to develop sensory platforms for military, based on optical I/O chips. 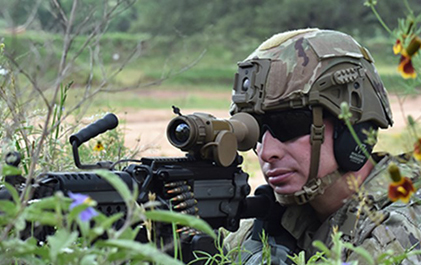 The fixed-price U.S. Army contract will run over the next five years.

Defense technology systems developer Leonardo DRS (“DRS”) has announced a contract to produce its “next-generation” thermal weapon sights for the U.S. Army. The firm-fixed-price contract from the U.S. Army Contracting Command is valued at $579 million over five years.

The combination provides rapid target acquisition capabilities. It gives users the ability to acquire targets day or night and in smoke or fog, which provides strategic and tactical advantages to the soldier. The contract was originally awarded on April 28, 2022.

Jerry Hathaway, senior VP and general manager of the DRS EOIS business, commented, “We have a long history of supplying the Army with advanced electro-optic and infrared technologies, and this award will help to keep soldiers safe and better ensure their mission is accomplished.”

At the core of the technology is DRS’s experience in the uncooled thermal weapon systems field. The FWS-I employs a proprietary vanadium oxide micro-electromechanical focal plane array that requires no visible light to operate.

The DRS EOIS business is part of the advanced sensing and computing segment, which has an extensive installed base across the U.S. military. Advanced sensing technology is a key strategic focus for Leonardo DRS as the company integrates its sensing and computing technologies for the U.S. armed forces. Production of the FWS-I sights will be in the company’s Electro-Optical Infrared Systems facility Melbourne, Florida.

Military and aerospace technologies giant Lockheed Martin and Ayar Labs, a developer of chip-to-chip optical connectivity, have announced a strategic collaboration to develop future sensory platforms based on Ayar’s optical I/O microchips. They say that the new platforms could be used across U.S. Department of Defense applications.

The co-authored a paper entitled ‘Converged RF Phased Arrays enabled by Silicon Photonics’ that will be presented at the IEEE International Symposium on Phased Array Systems and Technology, this week in Boston, Ma.