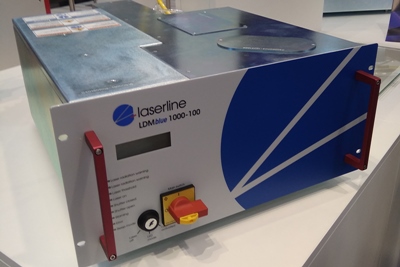 At least two laser companies - US-based Nuburu and Germany’s Laserline - are demonstrating kilowatt-level systems aimed primarily at copper welding at Messe Munich this year, although there is a crucial difference between the approaches taken by the two firms.

While Nuburu’s systems are based around single-emitter chips, Laserline has been working closely with laser diode developers at Osram Opto Semiconductors on a powerful bar design that mimics more conventional diode lasers operating in the near-infrared region.

Better absorption in the blue
The big advantage of welding with blue light instead is that all metals - but especially copper and gold - have a much higher absorption at the shorter wavelength. The difficulty is that the gallium nitride (GaN) semiconductor material required to produce blue-emitting diodes is at least a decade behind gallium arsenide (GaAs) in terms of technological maturity.

But thanks to Nuburu and the Osram Opto/Laserline team’s efforts under the recently completed “Blaulas” project, supported by the German government, that maturity gap looks to be closing.

Harald König from Osram Opto told a Munich panel session that the project had advanced blue diode conversion efficiencies to 45 per cent, while delivering a 23-emitter blue diode bar with a record power output of 107 W at around 445 nm, and only microchannel cooling required.

The ultimate aim was to produce a 1 kW fiber-coupled blue source, achieved by stacking together 12 of the diode bars. Laserline is demonstrating the resulting system this week at its LASER trade show booth. König said that the kilowatt-level system, delivered via a 1000 µm diameter optical fiber, demonstrated an ex-fiber wall-plug efficiency of 25 per cent. 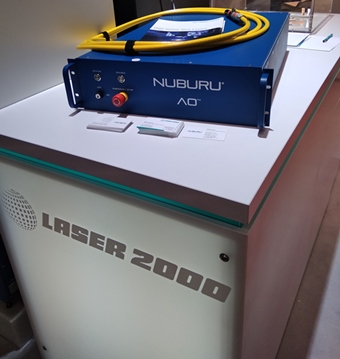 Higher overall efficiency
Although that conversion efficiency might not compare well directly to GaAs-based near-infrared diode lasers, the much higher level of absorption by metals in the blue region actually makes processing with the shorter wavelength – delivering more energy per photon – more power efficient overall.

While Nuburu’s 500 W systems are liquid-cooled and look considerably more bulky than the Osram-Laserline collaboration’s, during the same panel session the Colorado company’s co-founder Jean-Michel Pelaprat said that using single-emitters instead of bars delivered considerably better brightness – a critical advantage when it comes to welding applications.

“We get much better collimation of every single diode,” claimed Pelaprat, in comparison to the bar-based alternative design, which he said would suffer from variability in the pointing direction of the joined emitters.

Nuburu’s 500 W design is based on four “core” 150 W diode engines, combined using a series of interleaving mirrors. Pelaprat cited good long-term stability as another key attribute, and pointed out that because the more energetic blue photons are able to perform welding more quickly than infrared ones, a blue system ought to end up completing many more processes over its lifetime.

Optimized optics
Crucially, Nuburu has also developed its own lens optic, designed to optimize welding with the blue source by producing a high-quality beam. Showing a series of spatter-free results from copper and gold welding applications, Pelaprat said that the system had produced “superb welds” of copper foils typically found in lithium ion batteries, and hairpin components used in electric motors – as well as completing processes that are simply not possible with infrared lasers.

“Blue [industrial] lasers are here,” he concluded. “We are very mature, and shipping today.” Evidence of that commercial availability could be found on the LASER 2000 trade show booth, hosting both the 500 W and 150 W products. Pelaprat, who was previously at Coherent and CEO at diode maker Novalux, added that the company had produced a 1 kilowatt system from a pair of the 500 W sources.

LASER 2000 is about to ship its first Nuburu laser, with plenty of interest anticipated for applications in copper welding in electric vehicle batteries, alongside gold processing for high-end watchmaking and jewelry etching.