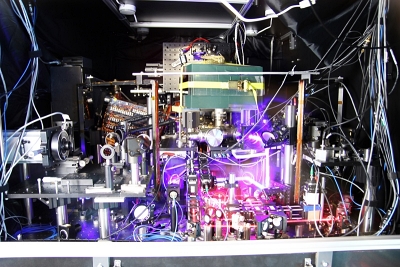 TopGaN, the Poland-based company specializing in gallium nitride (GaN) laser diodes, is developing novel sources that could be used in a number of emerging quantum technology applications.

That is because photons at specific wavelengths in the blue and near-ultraviolet spectrum match electronic transitions in a number of chemical elements suitable for cold-atom apparatus - notably strontium, ytterbium, rubidium, and magnesium.

It means that sources with sufficiently narrow linewidths can be used to cool those atoms and ions, to the kind of ultra-cold temperatures required for quantum sensing.

UK collaboration
Najda said that TopGaN has developed ridge waveguide laser diodes based on GaN alloys that can be packaged into compact, robust sources that could be manufactured at scale, and therefore a low cost.

Along with collaborators in the UK, including advanced semiconductor wafer foundry Sivers Photonics, the University of Glasgow, and the National Physical Laboratory (NPL), Najda is working on two ways to deliver the narrow linewidths required.

One is to use an extended cavity design, while the second approach is based around a distributed feedback (DFB) configuration.

The team has produced sources at one of the so-called “magic” wavelengths of 461 nm, which is suitable for cooling strontium atoms.

NPL is a key partner in the UK's National Quantum Technologies Programme, with world-leading expertise in optical clocks.

The laboratory is developing state-of-the-art timepieces based on single trapped ions of strontium and ytterbium, and strontium atoms held inside an optical lattice.

The latter design offers very good signal-to-noise ratios and low instabilities, and could be used in the future to redefine the second with unprecedented accuracy.