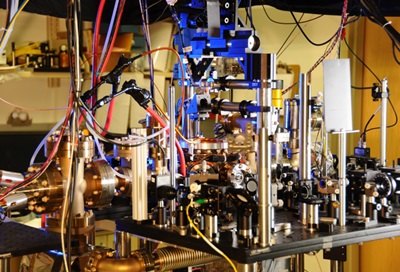 A pair of experimental atomic clocks based on “optical lattices” have set a new world-best for stability, suggesting a new level of precision timekeeping for both fundamental science and, in the longer term, practical applications.

The clocks, developed by a team at the US National Institute of Standards and Technology (NIST), are reported in the latest issue of the journal Science Express, with the use of ultra-low-noise excitation laser proving critical to the advance.

Cool clocks
The clocks are based on ytterbium atoms cooled to just 10 microkelvin (10 millionths of a degree above absolute zero). They are trapped in an optical lattice, which is described by the NIST team as “a series of pancake-shaped wells made of laser light”.

A separate laser is used to excite a transition between two energy levels in ytterbium, with the high stability resulting from the fact that the clock is based on as many as 10,000 cooled atoms.

Defined as the repeatability of the time taken for each “tick”, the stability of the new atomic clock has been measured at 1.6 x 10-18, or approximately ten times more stable than the previous best.

“This dramatic breakthrough has the potential for significant impacts not only on timekeeping, but also on a broad range of sensors measuring quantities that have tiny effects on the ticking rate of atomic clocks, including gravity, magnetic fields, and temperature,” said NIST.

The metrology institute sees the development as a major step forward in the evolution of next-generation atomic clocks. NIST physicist and co-author of the paper Andrew Ludlow said:

“The stability of the ytterbium lattice clocks opens the door to a number of exciting practical applications of high-performance timekeeping.”

Given that the work has been funded in part by NASA and the US Defense Advanced Research Projects Agency (DARPA), those practical applications look most likely to emerge from the areas of defense and aerospace, in global positioning and communications systems, as well as astronomy.

Tick stability
NIST explains that the ticks of any atomic clock must be averaged over a period of time to provide the best results. One major benefit of the very high stability shown by the new ytterbium clocks is that precise results can be achieved very quickly.

So whereas the current civilian time standard in the US, the NIST-F1 cesium fountain clock, must be averaged for about five days to achieve its best performance, the new ytterbium version could achieve an equivalent performance within a single second.

“Given this high level of stability, the ytterbium clocks can make measurements extremely rapidly - in real time in many cases - which could be important in rapidly changing application settings, such as the factory floor and the natural environment,” says NIST.

One of the key advances enabling the milestone performance was the recent construction of a second version of the clock, needed to measure and improve the performance of the original version, which was developed ten years ago.

At the same time, the NIST scientists have been able to make several improvements to the design of both clocks, for example using an ultra-low-noise laser to excite the ytterbium atoms.

The next step for the NIST team will be to measure the accuracy of the ytterbium clock, after which it can be directly compared to the existing NIST-F1 cesium standard.