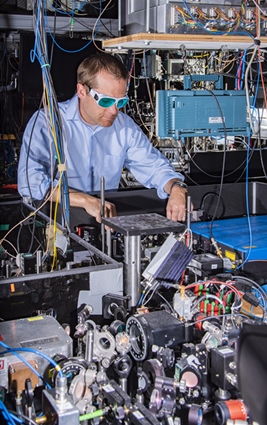 Researchers at the US National Institute of Standards and Technology (NIST) say that their latest optical clocks – based around ytterbium atoms trapped in a matrix of laser beams – appear good enough to detect gravitational waves and perhaps even dark matter.

Publishing the latest experimental results in Nature, Andrew Ludlow and colleagues at the Boulder lab reported record-breaking uncertainty, stability, and reproducibility with two of the clocks. Key figures of merit include a systematic uncertainty of 1.4 x 10-18, and a measurement instability of 3.2 x 10-19.

This means that the clocks are sufficiently sensitive for their time accuracy to be limited by changes in the strength of gravity with altitude on Earth, which according to Einstein’s theory of relativity sees time pass more slowly at lower elevations – something known as “gravitational red-shift”.

“Here we demonstrate local optical clock measurements that surpass the current ability to account for the gravitational distortion of space-time across the surface of Earth,” wrote the NIST team in its paper.

While this makes the ytterbium clocks less useful as timepieces, the flip side is the possibility of using them to test relativistic phenomena, including gravitational waves.

Gravity-limited time
Describing the clocks as offering a “royal flush” of performance improvements, Ludlow said: “The agreement of the two clocks at this unprecedented level, which we call reproducibility, is perhaps the single most important result, because it essentially requires and substantiates the other two results.”

He added: “This is especially true because the demonstrated reproducibility shows that the clocks’ total error drops below our general ability to account for gravity’s effect on time here on Earth.

“Hence, as we envision clocks like these being used around the country or world, their relative performance would be, for the first time, limited by Earth’s gravitational effects.”

The laser-based optical “lattice” used by the NIST team traps ytterbium atoms in such a way that a relatively large signal can be generated than with more conventional ion-based atomic clocks, improving their precision.

Other groups working on optical clock technology include a team at the UK’s National Physical Laboratory (NPL), where a similar system based on strontium is under development. The University of Tokyo’s Quantum Metrology Laboratory (QML) is another world-leading location, where Hidetoshi Katori and colleagues have been able to use the relativistic effect of a gravitational red-shift to measure the difference in height between two optical clocks.

According to NIST, its ytterbium clocks even now exceed the conventional capability for measuring the “geoid” - the shape of the Earth, usually based on tidal-gauge surveys of sea level.

“Comparisons of such clocks located far apart such as on different continents could resolve geodetic measurements to within one centimeter, better than the current state-of-the-art of several centimeters,” reports the team.

Practical implementations
In their latest work, the NIST team wrote that they improved optical clock performance by including thermal and electric shielding to protect atoms from any stray electric fields.

Efforts at NIST, NPL and QML are also under way to develop miniaturized and more robust and practical versions of the optical clocks, for real-world applications.

At NIST, that work is supported by NASA and the US Defense Advanced Research Projects Agency (DARPA), while in the UK a project named “Kairos” - referencing the Ancient Greek word for “the critical moment” - features NPL as part of a new consortium aiming to build a miniature atomic clock based around laser-cooled cesium atoms.

Meanwhile, the ytterbium atom is among potential candidates for the future redefinition of the international unit of time – currently derived from microwave transitions within a cesium atom.

NIST says that its optical clocks meet one of the international redefinition roadmap’s requirements, a 100-fold improvement in validated accuracy over the cesium atom standard, which vibrates at lower frequencies than ytterbium.

“These optical clocks could further be used to explore geophysical phenomena, detect gravitational waves, test general relativity, and search for dark matter,” they add in their new journal paper.