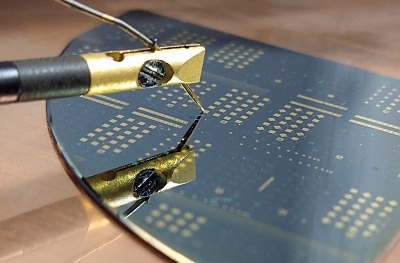 It is thought that the novel sources, which consume very little power, could be used in optical interconnections in place of more conventional laser emitters, helping to reduce both heat generation and associated cooling requirements, thus reducing overall energy consumption dramatically.

Half of the financial support for the development has come via the Innovate UK “Investor Partnership Program”, with matched funding from deep-tech seed fund UKI2S, the Scottish Growth Scheme, and the angel investor syndicate Equity Gap.

Escalating demand
According to Vector Photonics, 1310 nm continuous-wave PCSELs could deliver the equivalent system optical performance as the lasers currently used in data centers, whilst consuming only half the electrical power and producing far less heat.

Neil Martin, CEO of the University of Glasgow spin-out, said: “The rising power usage of hyperscale data centers is being driven by escalating demand from network connected devices, such as smartphones, PCs and the Internet of Things.

“Hyperscale data centres currently rely on high-performance lasers for the optical interconnects between servers. These lasers require so much electrical power to operate, that it is the heat they create, and the energy used by the systems which cool them, which has become the limiting factor to any increases in optical performance.”

Vector Photonics has been awarded the funding under Innovate UK’s “TITAN” (PhoTonIc CrysTal LAsers for EtherNet applications) project, with the aim of solving the heat problem.

“Since we anticipate the system optical performance requirements of next-generation, hyperscale data centers increasing in [the] future, it is only low-power consumption systems using PCSELs that can realistically facilitate this increase,” Martin added.

Exclusive license
The PCSEL technology is being developed under exclusive license from the University of Glasgow, which is also a shareholder in the company.

The devices were conceived and patented by Glasgow researchers Richard Taylor, David Childs, and Richard Hogg, who are also leading the Vector Photonics technical team.

In contrast to VCSELs or distributed feedback (DFB) sources, PCSELs do not use a Bragg stack structure, instead relying on a two-dimensional grating that is said to be easy to scale.

PCSELs also have a low contact resistance, ensuring high output power, and offer compatibility with any semiconductor laser material system - meaning that a wide range of emission wavelengths and applications can be accessed.

Vector Photonics also points to single-mode emission that scales with area, in-plane feedback, and the lack of an oxide aperture - meaning easier device production - as other critical advantages.