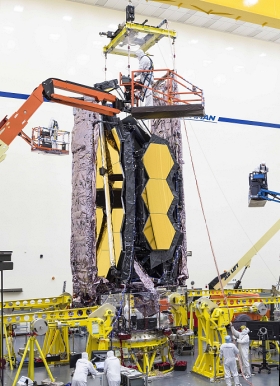 The much-delayed James Webb Space Telescope (JWST) appears to be on track for its October 2021 launch date, according to presentations from project leaders at this week’s SPIE Astronomical Telescopes and Instrumentation Digital Forum.

The 6.5 meter-diameter space telescope, which is so big that it has to be folded and stowed to fit into the Ariane rocket that will launch it into space, has recently completed vibration tests at Northrop Grumman’s facility in Redondo Beach, California - and is now in the final stages of of what are known as comprehensive systems tests (CSTs).

Once those are completed, the observatory will be stowed for thorough final inspections and then shipped to the Kourou spaceport in French Guiana. JWST should arrive in Kourou around three months before the October 31 launch date.

Testing, testing
Charlie Atkinson, chief engineer for JWST at Northrop Grumman, has been updating delegates at the SPIE event on JWST progress for nearly two decades - during which time the observatory’s budget has swelled to $9 billion and its launch date has been pushed back eight years.

NASA had confirmed the latest six-month delay in July this year, saying that a combination of technical challenges and complications caused by the Covid-19 pandemic were to blame.

In his latest presentation, Atkinson outlined many of the milestones that had been completed since the previous SPIE conference, which took place in Austin, Texas, in 2018.

Highlights have included full mechanical and electrical integration of the telescope, completed around a year ago, and vibration tests in September 2020 designed to mimic the conditions experienced during launch.

Describing what was left to do, Atkinson said that the next key step was to complete the final “CST” stage, ahead of final inspections and shipment to Kourou.

Also presenting at the SPIE conference Michael McElwain, a JWST project scientist from NASA’s Goddard Space Flight Center, said that four CSTs had now been completed, with the fifth and final one scheduled for late January.

Six-month commissioning
McElwain indicated that the final CST would repeat tests that had already been done previously to verify functionality, adding that Ariane’s launch specifications had been met, with no indications of structural failures.

He also explained that the precise launch date would depend on exactly when JWST arrives at the European Spaceport site in Kourou.

“JWST is fully integrated, and in the final stages of post-environmental deployment and comprehensive systems testing,” McElwain said. “Tests and models suggest that JWST will meet optical and thermal requirements, [and our] mission operations center is prepared.”

He added that extensive rehearsals were now taking place across seven different mission teams, and that Covid-19 working protocols had been established.

With the end of the year just days away, we're excited to announce #NASAWebb has cleared one of its most important milestones to date. Its 5-layer sunshield has been successfully deployed & tensioned into the same configuration it will have in space! https://t.co/cXApSsTNZm pic.twitter.com/eLgnsWcpgk

Assuming a successful launch next year, JWST will then undergo a six-month commissioning procedure once it has arrived at the “L2” Lagrange point - a position in space around 1.5 million kilometers from Earth where the gravitational pull of the Earth and the sun are in equilibrium. That position will take approximately one month to reach post-launch.

After a period of cooling, commissioning of the telescope itself will begin, followed by the four scientific instruments on board.

If all goes according to plan by May 2022 JWST should finally be ready to start making scientific observations, sending back what are expected to be some unprecedented views of the cosmos.

McElwain pointed out that any scientist can apply for observation time on the JWST, highlighting the new “dual anonymous” review process now in place. Previously, applications for telescope time have not been anonymized - but studies have shown that the dual anonymous approach leads to more equitable allocations.

• For more details about the latest developments within the JWST mission, check out session 6 at this week's SPIE Astronomical Telescopes and Instrumentation Digital Forum.