Yield over 1.3 megajoules said to put researchers at the threshold of new experimental regime. 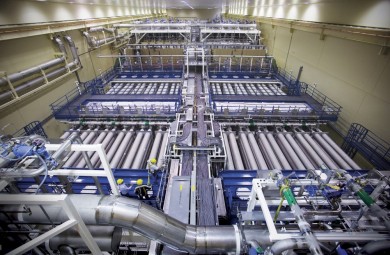 Fusion in sight: lasers on target

The National Ignition Facility (NIF) has announced the results of its latest laser firing experiment, and said that it marks a significant milestone on its path to fusion ignition.

The ultimate goal is to obtain at least as much energy out of the process as the lasers put in, initially conceived as a potential route to new energy sources. NIF's goals have more recently been redirected towards the study of processes underway within nuclear weapons without full-scale testing.

Research at NIF has involved investigations into both ways to generate laser beams of the high power required, and how to manage the interactions of those lasers with fusion targets to generate an energy yield. NIF has made steady incremental progress in beam power since achieving "first light" with a bundle of four laser beams producing a 10.4 kJ infrared pulse in May 2003.

In 2012 a 192-beam shot was measured at 1.8 MJ and 500 TW, directed at a depleted uranium capsule containing a mixture of hydrogen, deuterium and tritium. This test demonstrated that the laser conditions required to achieve ignition were within reach and that the laser will operate at the design specifications necessary, NIF told optics.org.

The following year another 192-beam shot achieved a neutron yield equivalent to 8 kJ of neutron energy from a deuterium-tritium target capsule, indicating that fusion reactions in the hot plasma had started to self-heat the burning core and enhanced the yield closer to the point where fusion reactions dominate the process.

A record for energy levels in the NIF's beam shot was achieved in 2018 when the facility generated a pulse of 2.15 MJ, by which point the project team had addressed multiple technical challenges related to mitigation of damage to the optical components and discrepancies between experimental data and theoretical models. The result was said to represent the highest yield, yield amplification, pressure and implosion velocity reported by the Facility.

The new milestone now reached in August 2021 is an energy yield from the target of more than 1.3 MJ, representing around 70 percent of the energy that the laser pulse had delivered to the fuel capsule in its sights, and "generating more than 10 quadrillion watts of fusion power for 100 trillionths of a second," according to NIF.

A complete assessment of the new results will take place through peer-reviewed papers, but NIF's initial analysis shows a 25-times increase over the then-record yield of 2018, and indeed an eight-fold improvement over more recent experiments conducted at the facility in spring 2021.

"This result is a historic step forward for inertial confinement fusion research, opening a fundamentally new regime for exploration and the advancement of our critical national security missions," said Lawrence Livermore Director Kim Budil. "It is also a testament to the innovation, ingenuity, commitment and grit of this team and the many researchers in this field over the decades who have steadfastly pursued this goal."

The breakthrough in yield is characterized by NIF as allowing them to improve the numerical modelling used to predict what happens at the threshold of ignition. Plans for repeat firings to duplicate the experiment are well under way, although NIF commented that it will take several months for the experiments to be executed.

"Gaining experimental access to thermonuclear burn in the laboratory is the culmination of decades of scientific and technological work stretching across nearly 50 years," said Los Alamos National Laboratory Director Thomas Mason. "This enables experiments that will check theory and simulation in the high energy density regime more rigorously than ever possible before and will enable fundamental achievements in applied science and engineering."