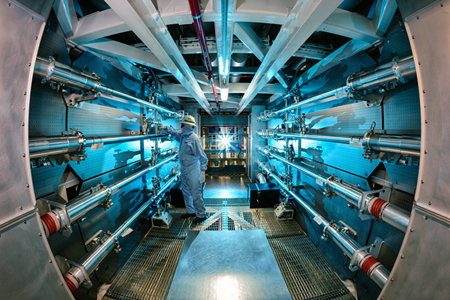 Power up! The preamplifiers of the LLNL's National Ignition Facility are readied.

Ed Moses, principal associate director for NIF and Photon Science, commented, "The yield was significantly greater than the energy deposited in the hot spot by the implosion. This represents an important advance in establishing a self-sustaining burning target, the next critical step on the path to fusion ignition on NIF."

Early calculations show that fusion reactions in the hot plasma started to self-heat the burning core and enhanced the yield by nearly 50 percent, pushing close to the margins of so-called “alpha burn”, in which fusion reactions dominate the process.

The primary mission of NIF is to provide experimental insight and data for the US National Nuclear Security Administration's science-based stockpile stewardship program. The research team said the experiment “represents an important milestone in the continuing demonstration that the stockpile can be kept safe, secure and reliable without a return to testing by underground nuclear explosion testing”.

The latest cryogenic implosion provides an important benchmark for the program's computer simulation tools, and represents a step along the Path Forward for ignition, which was delivered by the NNSA to Congress in December 2012.

Omar Hurricane, lead scientist on the campaign added, “This work was born out of the fierce competition of ideas of how to fix the [nuclear research] problem. In this particular experiment, we intentionally lowered the goal in order to gain control and learn more about what Mother Nature is doing. The results were remarkably close to simulations and have provided an important tool for understanding and improving performance."

These promising returns were the result of a laser experiment that delivered 1.7MJ of ultraviolet light at 350TW of peak power. NIF is the world's largest and most energetic laser system, which has already pushed past its design specifications of 1.8MJ and 500TW, leaving headroom for more exploration of this idea. The campaign is the product of a strong collaboration between LLNL's NIF and Photon Science and Weapons and Complex Integration directorates. 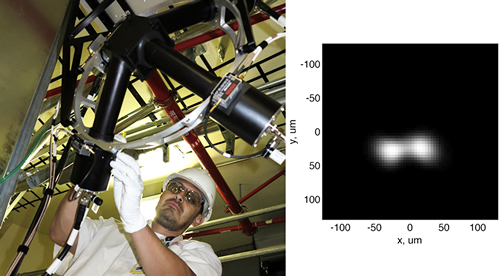 The high-foot pulse produces a higher adiabat, or internal capsule energy, in the target capsule. This was the third layered DT shot in the campaign to commission a higher-adiabat platform for studying mix – the penetration of cold DT fuel and capsule ablator material into the DT fuel hot spot.

With the DT ice layer at close-to-ignition specifications and the NIF lasers delivering 1.48MJ of ultraviolet laser energy and 430TW of peak power to the target, the shot resulted in the highest yield achieved so far from a layered DT implosion – more than 1×1015 neutrons. A remarkable neutron image showed a "ring-like" structure of neutron emission (see above).