New 'ZEUS' facility will become the highest-power laser in the US when completed. 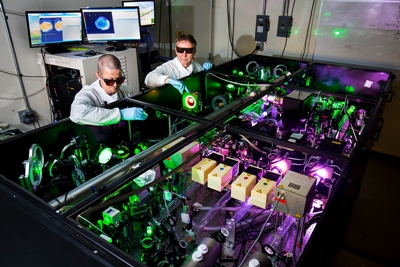 Ready for an upgrade: the HERCULES laser at CUOS

Scientists at the University of Michigan’s Center for Ultrafast Optical Science (CUOS) - recently named for 2018 Nobel laureate Gérard Mourou - have won funding to build what will become the highest-power laser in the US.

The new “ZEUS” (Zettawatt-Equivalent Ultrashort Pulse Laser System) user facility, supported with a $16 million grant from the US National Science Foundation, will represent an upgrade to the existing HERCULES laser at CUOS, which is capable of reaching peak powers in the 500 TW range.

Built partly with commercial components, ZEUS will raise that power level to 3 PW – beyond even the power rating of the colossal 192-beam National Ignition Facility (NIF) at Lawrence Livermore National Laboratory (LLNL). It is scheduled for completion in September 2023.

Dual beamline
Part of the thinking behind the funding is to re-establish the US as a world leader in high-intensity laser science. Although LLNL’s Nova laser was the first in the world to breach the petawatt threshold in 1996, since then - in terms of peak power - the US has not kept pace with the rest of the world.

Exploiting the chirped-pulse amplification (CPA) technique developed by Mourou and fellow Nobel laureate Donna Strickland at the University of Rochester in the 1980s, the Extreme Light Infrastructure (ELI) program in Europe now boasts two 10 PW facilities, while China already hosts a 5.3 PW laser and has grand plans to build a 100 PW source.

CUOS director Karl Krushelnick said in a release from the University of Michigan: “This laser [ZEUS] will have the highest peak power in the US and will be among the world’s most powerful laser systems for the next decade.”

Krushelnick is listed by the NSF as principal investigator for the ZEUS project. The NSF’s project abstract reveals that the planned facility will be based around a dual-beamline laser system that will provide unique new capabilities for both US and international scientists, with 30 weeks per year dedicated to external user experiments.

It also explains that the “zetawatt” element of ZEUS refers to the interaction of a petawatt laser pulse colliding with a GeV energy electron beam that can be generated by one of its two beamlines.

“This geometry provides the equivalent of a 1021 W power laser interaction in the rest frame of the electron beam,” states the abstract. “It will consequently allow exploration of fundamental yet unanswered questions regarding nonlinear quantum electrodynamics in relativistic plasmas, including non-perturbative quantum radiation reaction and electron-positron pair production mechanisms.”

Cancer therapies
That cutting-edge high-energy physics jargon roughly translates as opening up the possibility of creating matter and anti-matter from nothing - also known as “boiling the vacuum”. However, the ZEUS laser should have plenty of other benefits, including to help make advanced cancer therapies more widely available to patients, by shrinking the size of the accelerators needed to generate proton beams and radioactive isotopes.

Other applications could include better detection of nuclear weapons materials in shipping containers, new insights into the physics of black holes, and the ability to investigate how materials behave on unprecedentedly short timescales.

Perhaps as significant as all of those applications is that ZEUS will end up being used to train the next generation of laser scientists, many of whom will be expected to go on to work in academia, high-technology industries, and at US national laboratories.

“More than that, it will help advance our understanding of the cosmos by re-creating some of the universe’s most energetic light and particle acceleration phenomena in a university laboratory setting.”