Fraunhofers and partners report that exchange was securely encrypted by means of light quanta. 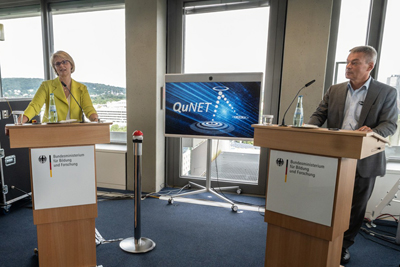 On August 10th, two German Federal agencies communicated via video over an optical link for the first time in a quantum-secure manner.

The QuNET project, an initiative funded by the German Federal Ministry of Education and Research (BMBF) to develop highly secure communication systems, is demonstrating how data sovereignty can be guaranteed in the future.

It was a foretaste of the communication of the future – or rather, the “data security” of the future. Because when Federal Research Minister Anja Karliczek invited members of the Federal Office for Information Security (BSI) to a video conference, everything appeared to be the same, at least for outsiders.

Together with Andreas Könen, Head of the Cyber & IT Security Department at the Federal Ministry of the Interior, Building and Community (BMI) and BSI Vice President Dr. Gerhard Schabhüser, the minister conversed via video stream.

Yet this videoconference has opened a new chapter in the highly secure communication of the future, say the development partners. The conversation was not encrypted using conventional methods but by means of light quanta. This means that if a hacker tries to access the keys to be generated, which are later used for data transmission, the light particles are disturbed. 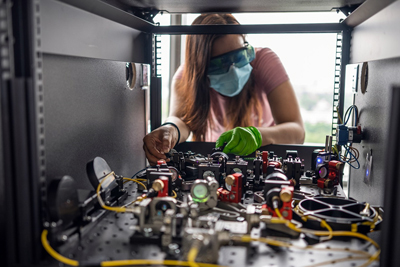 QuNET is researching how to use light quanta to make communications secure.

Then, if an eavesdropping attempt is discovered, the key is discarded and a new one is generated. By means of this strategy, only private keys are kept and therefore long-term security of the agreed keys is achieved.

Germany’s Federal Minister of Education and Research Anja Karliczek explained, “Quantum communication is one of the key technologies that play a crucial role in IT security and can help us prepare for future threats.

She added, “This is important because cyber security and cyber sovereignty are preconditions for the stability of democracy and also why I launched the QuNET initiative two years ago.

“Our objective is to take advantage of the work of QuNET and the other projects on quantum communication funded by the Federal Research Ministry to lay the foundations for an ecosystem of producers and providers of quantum communication solutions in Germany. In this way, we can ensure the swift translation of innovative technologies and components into broad application.”

In order to be able to protect the privacy of citizens as well as states and companies in the future, there is already a great need for action today, say the development partners: “It is not just a matter of developing new and highly secure communication systems based on quantum know-how but also of finding ways to integrate this new technology into existing IT infrastructures (such as fiber optic networks) and to take established cryptographic processes into account.” 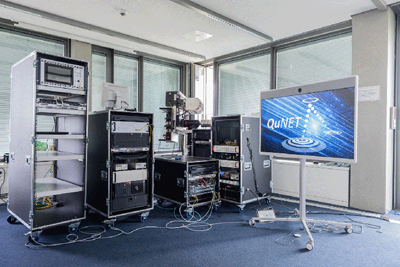 Technology setup on the side of BMBF.

At the end of 2020, the research organizations involved in the initiative – Fraunhofer-Gesellschaft, the Max Planck Society and the German Aerospace Center – presented important basic principles for modern and secure communication standards. The scientists have further developed the overall architecture for systems for quantum-safe communication, as well as possibilities for exchanging quantum keys.

In the setup of the first quantum-based videoconference between BMBF and BSI, multiple free-space and fiber quantum channels have been used. This corresponds to a more complex scenario than a connection via a single quantum channel.

Besides the video conference aspect of the demonstration, the setup was also used to produce scientific data which might give important insights for communication in complex quantum secure networks of the future.