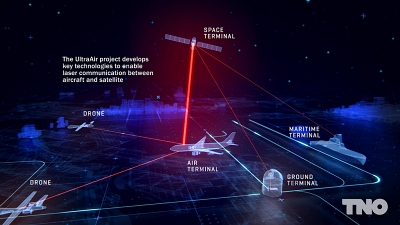 Airbus is working with engineers in The Netherlands to develop a laser terminal for high-speed communication between aircraft and satellites that could be used by commercial airlines.

Known as “UltraAir”, the project will see the aerospace giant partner with the Netherlands Organisation for Applied Scientific Research (TNO) and the Netherlands Space Office (NSO).

The effort is part of the European Space Agency’s “ScyLight” program, which is focused on the development of high-speed and secure optical communications.

“Airbus is leading the project and brings its unique expertise in laser satellite communications, developed with the SpaceDataHighway program,” announced the company.

“Laser communication technologies are the next revolution in satellite communications, bringing unprecedented transmission rates, data security and resilience to meet commercial needs in the next decade.”

TNO is providing experience in high-precision opto-mechatronics, with support from the Dutch high-tech and space industries. Airbus Defence and Space in the Netherlands will then be responsible for industrial production of the terminals, while Tesat - another Airbus subsidiary - will be involved in all testing activities.

Testing times
The first set of tests will take place at the end of this year, inside Tesat’s laboratories. That will be followed by a second phase of ground tests on the island of Tenerife that are scheduled for early 2022.

“The UltraAir terminal will be capable of laser connections between an aircraft and a satellite in geostationary orbit 36,000 km above the Earth, with unparalleled technology including a highly stable and precise optical mechatronic system,” state the collaborators.

They add that the demonstrator should pave the way for a fully-fledged UltraAir product in the future, with data transmission rates expected to reach gigabit-per-second levels while also providing anti-jamming and a low probability of interception.

Although initial applications will be in the defense realm, it is thought that the technology could be opened up for commercial use in the future.

Airbus said: “In this way UltraAir will not only enable military aircraft and unmanned aerial vehicles (UAVs) to connect within a combat cloud, but also in the longer term allow airline passengers to establish high-speed data connections thanks to the Airbus’ SpaceDataHighway constellation.

“From their position in geostationary orbit, the SpaceDataHighway (EDRS) satellites relay data collected by observation satellites to Earth in near-real-time, a process that would normally take several hours.”

Quantum potential
The EDRS network, established over the past five years, has initially been used by the ESA’s Copernicus constellation of “Sentinel” satellites, which provide an array of data-hungry Earth imaging and observation services that benefit from the high-speed optical links.

In 2016 the very first image returned to Earth via the network was of Reunion Island, near Madagascar in the Indian Ocean, captured by the Sentinel-1A satellite.

At the time, the ESA explained the utility of the laser links: “Satellites like the Sentinels can help to survey areas struck by natural disasters. When the situation on the ground is changing rapidly, hours-old satellite information is of little use to rescue teams. EDRS will allow access to time-critical data acquired around the world.”

Since then, multispectral capability has been added to the network, thanks to the Sentinel-2 satellites - meaning that images of phenomena such as algal blooms can be captured and returned to Earth within hours.

The network's data capacity has also now been extended, while the “ScyLight” program will add the potential for even higher-security links in the form of quantum encryption.