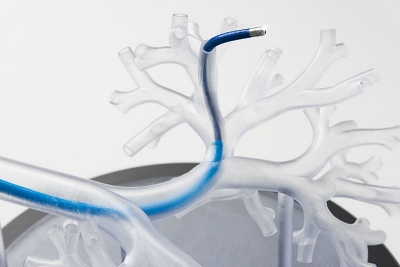 An optical biopsy technique has shown good potential for use in real-time diagnosis of lung cancer.

The “Cellvizio” imaging platform from France-based Mauna Kea Technologies - already used in a number of other diagnostic procedures - uses confocal laser endomicroscopy (nCLE) to distinguish between malignant and benign lesions.

In a new small-scale study on 26 patients with suspected peripheral lung cancer, the approach was compared with conventional but more invasive and time-consuming diagnostic tools.

Results showed that video analysis using Cellvizio was able to detect malignancy in 22 out of the 23 patients with lung cancer.

Reporting their study - which was funded by Mauna Kea - in the journal Thorax, a team from Amsterdam University Medical Center led by Professor Jouke Annema concluded:

“Thanks to its in vivo cellular imaging capability, Cellvizio can be used as a real-time detection tool for lung cancer with very high accuracy.”

Demand for early-stage lung cancer screening is expected to increase in the US, with Gershon hoping that this will provide a significant new market opportunity for Cellvizio.

According to the American Cancer Society lung cancer is by far the leading cause of cancer death in the US. It expects another 240,000 people to be diagnosed with the disease in 2021.

Earlier this year, the US Preventive Services Task Force (USPSTF) issued a new recommendation to nearly double the number of people eligible for lung cancer screening in the country.

If adopted, it is expected to increase the number of screening-detected lung cancer cases at early stage by 27 per cent. However, current screening techniques are unable to confirm with a high degree of certainty that the biopsy needle is sampling within a targeted lesion - meaning that biopsy accuracy remains low.

High accuracy
Although the number of patients in the Cellvizio trial was small, the high accuracy shown and the relative ease with which nCLE-acquired video “raters” were able to identify tumors indicates that the optical approach could improve matters.

“To the best of our knowledge, this is the first systematic study analyzing nCLE imaging in peripheral lung tumors,” wrote the Amsterdam team in their paper. The same team has previously used Cellvizio to diagnose lung cancer and metastatic tumors in lymph nodes.

“We demonstrated that nCLE imaging in a peripheral lung tumor allows real-time visualization of individual malignant cells at the needle tip, enabling tissue acquisition at the optimal position.

However, they also point out some key limitations of the study, besides its small size. One is that the patients selected for the trial had relatively large lesions, and a high prevalence of cancer.

“Although nCLE imaging provides high-quality microscopic images in a real-time fashion, its use is inevitably dependent on the guidance tool,” they pointed out, adding that the approach would need to be tested in larger, multi-center trials, on patients with smaller lesions and against a wider range of benign tissues that might be more difficult to distinguish from cancerous tumors.