University of Houston device could improve image quality in endoscopes and cameras. 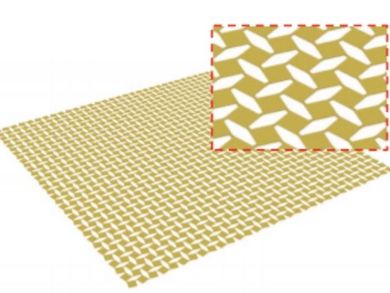 A new image sensor designed using the principles of kirigami patterns could lead to better images from cameras and endoscopes.

Developed at the University of Houston and described in Nature Electronics, the new structure is a "curvy imager," a class of sensor designed to be capable of adjusting its shape.

According to Houston's Cunjiang Yu, "existing curvy sensors are either flexible, but then not compatible with tunable focus surfaces; or stretchable, but with low resolution and pixel fill factors."

If more efficient curvy sensors could be developed they would be of benefit in several camera-based applications, potentially able to work with a single lens while correcting aberrations and offering wide field of view from a compact device.

They should also have advantages over competitor flexible image sensors built on conventional plastic substrates or on foils, which have been under development for some time but which are inherently limited in the complexity of their 3D geometries.

The Houston project took its answer from kirigami, a design system of geometric tessellations and cuts originally used to create paper structures able to deform or extend into a variety of different shapes.

Kirigami has already been investigated in modern photonics applications, exploiting the ability to create such structures by cutting a substrate material while it is conveniently flat and then transforming it into more complex configurations by stretching.

Examples of applied kirigami have included a potential route to deformable metamaterials, where the precise orientation of surface features is the key parameter determining the response to incident light. Kirigami was also used by the University of Michigan to create precise cuts in a plastic ribbon as a way to direct terahertz radiation.

CAS uses a pneumatically inflated elastomeric balloon as a conformal stamping medium to pick up pre-fabricated electronic devices and print them onto curvy surfaces, according to the project team. In a 2019 Nature Electronics paper the university demonstrated how CAS could be used with silicon pellets, photodetector arrays, electrically small antennas, hemispherical solar cells and smart contact lenses.

The project has now used CAS to transfer an array of ultrathin silicon optoelectronic pixels in a kirigami design onto curvy surfaces, as a route to creating curvy and shape-adaptive imagers with high pixel fill factors.

According to its published paper, the project used this technique to create an imager with a 32×32-pixel array and a fill factor before stretching of 78 percent. Imaging trials showed that the sensor component could then maintain its electrical performance when placed under 30 percent biaxial strain.

The Houston team also developed an adaptive imager, by combining a concave-shaped imager printed on a magnetic rubber composite with a tunable lens.

"This new adaptive device can achieve focused views of objects at different distances," commented Yu. "Adaptive optical focus is achieved by tuning both the focal length of the lens and the curvature of the imager, allowing far and near objects to be imaged clearly with low aberration."