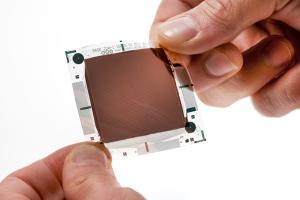 A pair of recently unveiled proof-of-concept devices from two different development teams indicate the strides being made towards flexible plastic-based image sensors, and the potential advantages they may have over their inorganic counterparts.

The first component, developed by Plastic Logic of the UK and France's Isorg, was on show at the LOPE-C 2013 printed electronics conference held in Germany in June 2013.

The second was displayed at the 2013 International Image Sensor Workshop (IISW 2013) held in the US during the same month, unveiled by Imec of Belgium and Holst Centre, a R&D center in The Netherlands co-founded by Imec. Research results from this device were presented at the workshop in collaboration with Philips Research.

On the threshold
The Anglo-French sensor is said to be the first conformable organic image sensor of its type, potentially allowing more favorable power-to-weight trade-offs and novel optical design parameters for any systems with a digital imaging element.

"This is the first time an organic thin-cell transistor backplane has been combined with a organic photodiode layer which is printed over the plastic substrate," confirmed Ian Reid of Plastic Logic to Optics.org. "Plastic Logic manufactured the plastic organic thin-film transistor backplane, which was then combined with ISORG's organic photodetector (OPD) technology. Some integration work was involved, but both processes are fundamentally mature and established by the respective companies."

"This is a proof-of-concept demonstrator and was designed as such, so we did not push the manufacturing process or the sensor performance to its absolute limit," noted Reid. "The pixel resolution, which is determined by the backplane, equates to 60 pixels per inch (ppi); not spectacular, but chosen to simplify the testing and characterization task at this stage."

Although the developers have set no target resolution for any final product, the high-resolution processing developed by Plastic Logic for the manufacture of backplanes in electrophoretic displays has comfortably achieved densities of 150 to 225 ppi, so steps towards that figure seem readily foreseeable.

Both the backplane and the OPD layer are manufactured using printing operations at ambient temperature, potentially leading to substantial cost-efficiencies compared to the manufacturing processes involved in traditional inorganic components. A printing operation could also enable distributed sensor arrays over larger areas than can be achieved by silicon-based processes, avoiding the limits imposed by wafer size and fabrication technology.

The flexible nature of the sensors should bring its own advantages, lending itself to non-planar sensor arrays following curved or distorted paths, and opening up an extra design dimension for engineers. A further advantage could be the greater spectral range commonly shown by OPD components, and Reid envisages imaging systems able to employ the same component type for near-IR and visible sensing.

"We have known for some time that our flexible plastic technology is usable not just in backplanes for driving displays, but for other types of applications too," he said. "Having industrialized a process successfully for driving electrophoretic displays, it's natural to look at where we can take the technology. We are on the threshold of something very exciting in the flexible electronics area, and the design community is starting to think about what they can do with it."

Imagers on foil
The sensor presented by Imec and Holst Centre is characterized by the developers as a large-area fully-organic photodetector array fabricated on a flexible substrate. It has been designed to be sensitive to wavelengths in the range 500 to 600 nm, making it compatible with typical scintillators used in x-ray imaging applications. 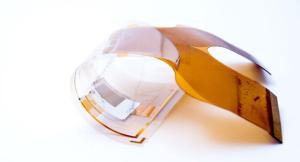 "Our arrays were demonstrated at IISW 2013 in the same week as the work shown at LOPE-C 2013," commented Pawel Malinowski of Imec. "The specifications of both prototypes show some similarities, but also many differences, of which the most obvious examples are the 32 x 32 pixel array of the Imec/Holst Center device, and its 200 micron pixel pitch."

A further distinction is that the demonstrator was made using evaporated small molecules as the OPD active layer.

"The organic semiconductors have very high absorption coefficients, allowing the active layer to be made extremely thin - below 100 nm in our case," noted Malinowski.

This in turn means that the aspect ratio of the pixel remains very advantageous for high fill-factor and low cross-talk, even with sub-micron pixel area scaling. In addition, the organic compounds can be processed on foils at low temperatures, opening up another set of design possibilities such as the conformal coating of randomly shaped substrates.

Malinowski commented that organic photodetectors are constantly evolving to match the performance of their inorganic counterparts, and recent demonstrations have shown the possibility of enhancing the performance of CMOS imagers by the introduction of an organic active layer.

"We are currently working towards a pixel resolution of 126 microns, yielding 80 ppi, using processing on foil," he said. "With the present technology, one can think of going towards 80 micron resolution. Further scaling requires more advanced semiconductors with higher mobility."

Additional property enhancements could include tuning the absorption spectrum through careful choice of the appropriate molecule or polymer. In principle, selecting the right organic semiconductors for red, green and blue pixels in an imaging array could eliminate the need for color filters, according to Imec.

The Imec prototype is targeted at X-ray imaging in conjunction with a scintillator, where the main advantages are its robustness or unbreakability, along with light weight and potentially easy upscaling to larger full-body imaging arrays. But foil-based processing operations could also represent a route to flexible sensors well-suited to industrial and machine vision applications, or aerospace inspection.

In advanced imaging systems, Malinowski envisages substituting traditional, flat image sensors with conformable devices that follow the wavefront, to limit the aberrations and simplify the optical system. In the meantime, he believes that practical performance improvements in flexible image sensors seem sure to follow.

"There is ongoing and rapid progress in this field, with many improvements still to be demonstrated," he said.