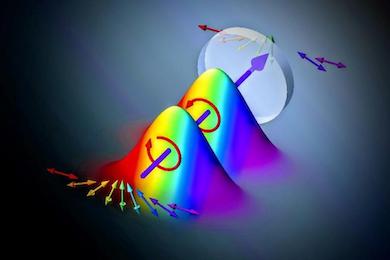 The ability to structure a laser pulse in various inventive ways has been key to several breakthroughs in spectroscopy.

Control of a laser pulse's polarization has been a particularly useful factor in both fundamental studies and applied optics, and a project led by Finland's Tampere University has now developed a route to correlating polarization with the color of a pulsed laser.

Since polarization can be detected at very fast rates by modern photodetectors, this could allow spectral changes to be measured on nanosecond timescales, potentially offering a way to speed up spectroscopic analysis to rates not feasible using current methods. The research was reported in Optica.

"Our work shows a simple way to have different polarizations for all color components of the laser," commented Lea Kopf from Tampere University. "By using this light as a probe, we can simply measure the polarization to gain information about changes in the color spectrum."

The project built on existing use of spatial vector beams, a form of light in which a laser's polarization and amplitude both vary within the beam. When an object moves across such a beam it affects the overall polarization, and recording that change can be used to track the object's motion.

Tampere University and partners the National Research Council of Canada have developed this principle into the creation of spectral vector beams (SVBs), in which the polarization is dependent upon the wavelength and the color of the light.

"This correlation can be exploited in spectroscopic measurements using only polarization measurements, which are generally simpler to measure than the quantities often measured when performing more conventional spectroscopy," noted the team.

According to the project's published paper, SVBs were created using simple modulation of a femtosecond laser pulse with a birefringent crystal, coherently splitting the pulse into two parts each having a different polarization.

The project's experimental concept involves a train of such SVBs propagating through a sample and emerging with their polarization component altered. Detecting this change could potentially be done much more rapidly than a determination of other spectroscopic parameters.

As a proof-of-concept experiment, the project deliberately manipulated the spectral components of SVB pulses to simulate different absorption patterns of a model experimental target. It then tested whether detection of polarization with photodetectors was enough on its own to track those spectral manipulations, and how rapidly that detection could be made.

"In our experiments, we reach readout rates of around 6 MHz, which was limited by our technical ability to modulate the spectrum," noted the project in its paper. "We can in principle reach GHz readout rates."

Future work could see the SVB principle applied to the use of supercontinuum light sources, and simulations by the project suggest that the overall spectral range could in those circumstances be extended to more than 1000 nanometers. Beyond more rapid spectroscopy, the work also has potential applications in quantum optics studies.

"We are happy that our fundamental interest in structuring light in different ways has now found a new direction, which seems to be helpful for spectroscopy tasks which are usually not our focus," commented Robert Fickler of Tampere's Experimental Quantum Optics group. "We have already started discussing how to apply and benefit from these ideas in our quantum photonics experiments."